We’re in! We’re in the new house! And all the fun things like TV and Wi-Fi are (mostly) set up, so I can finally communicate via blog without having to sneak away to a coffee shop somewhere, which clearly could not happen anyway because I’d have to drag along a 3-year-old and a baby and somehow try to accomplish something and just no.

If you’ve known me for two seconds — or even if you’re a complete stranger who just happened to read the intro on my home page — you are aware that I’m not a huge fan of change. I get so comfortable in my surroundings that it’s maybe a little bit self-destructive.

I am a total anti-hoarder when it comes to things, but with people and places my head is kind of a cluttered mess. I hold on much longer than I probably should. Fully letting go makes me uncomfortable. Every time I’ve had to move out of something — my parents’ house, my dorm room, my very first tiny third-floor apartment — I’d get all weepy and wistful. This happened whether I lived there for two days or two years. I could take a mini vacation, and as the hotel room door swung slowly closed, I’d be like, “BUT THE MEMORIES!”

And then, two and a half weeks ago, we left the rental house. ‘BYE FELICIA.

I didn’t pause to reflect. Just ran straight out the door and wrestled two small children into a car and drove off into the sunset. Except that it was noon on a Saturday in California and traffic was bumper to bumper, so there was no sunset and also no driving. But it was the first time I’ve ever actively looked forward to living somewhere else.

Even though I didn’t give it a second glance, a sneaky bit of nostalgia has crept in now that it’s been a couple weeks. That horrifically-maintained rental was filled with stains and spiders and moths and broken appliances and dangerously faulty outlets and filth I could NOT scrub up from the floors, but it was the place where I went into labor with my son. It was the place where my daughter grew out of toddlerhood. It was the place where we made some pretty great friends (who will now have to drive FOR.EV.ER. to see us).

Trusty ol’ sentimentality. Comes back and gets me every time. Al claims I would miss a dungeon if I lived there for more than two seconds.

We are a looong way away from things now. Like, everything. Al’s work. The mall. Our doctors. Even Whole Foods, which is extra weird since I thought it was California law to have one every few thousand yards or something. So that’s sort of inconvenient, and I’m pretty sure I may never see my husband again.

But now that we no longer live in The Hub, there’s something that feels a little slower, a little more leisurely. And although I’ve already witnessed the occasional road-raging pickup truck driver, people seem friendlier overall. They wave when you let them in on the freeway. They hold the door for you and offer to give you their grocery cart. It’s not everyone, but it’s more people than I’m used to out here.

It also feels more Californian, somehow. FINALLY. To me, our specific location in The Hub always seemed like a SUPER crowded, overrated version of our Michigan suburb: we were still surrounded by basic strip malls and relatively flat terrain, but we’d lost our beautiful freshwater lakes and magically unpredictable seasons and the familiarity of friends and family, so that was some nonsense. But way out here, I can see the mountains from our kitchen. There are fresh avocados for sale and occasional palm trees lining winding roads. And at night, sometimes there’s a breeze so aquatic, so almost salty, you’d swear the ocean was right across the street instead of several miles away. This is more of what I’d pictured when I said, just over a year ago, We’re moving to California.

The layout of the new house is very similar to what we had in Michigan — with the added bonus of a loft and a playroom, yay! — so in just two weeks, it already feels much more homey than the rental ever did. Which is also kind of weird, because INSIDE the house I’m like, “Ahh. We’re back!” And then I glance outside and there’s this bizarre disconnect: Oh, wait. Nope. I still live in California. 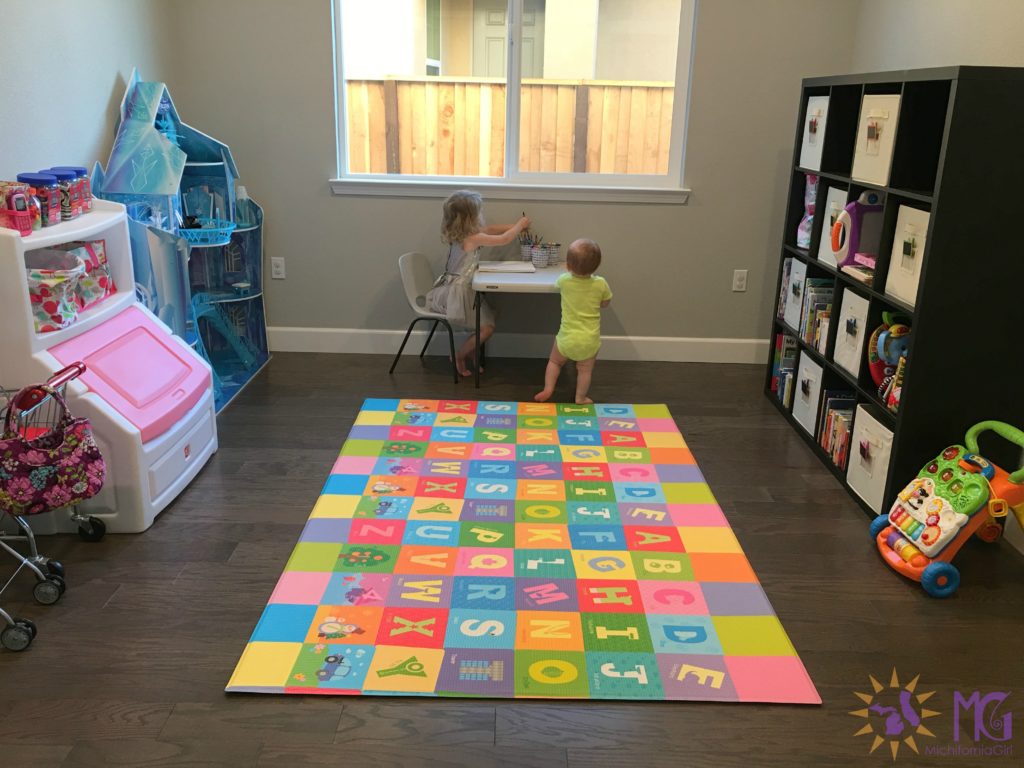 Peaches & Baby B in their new playroom 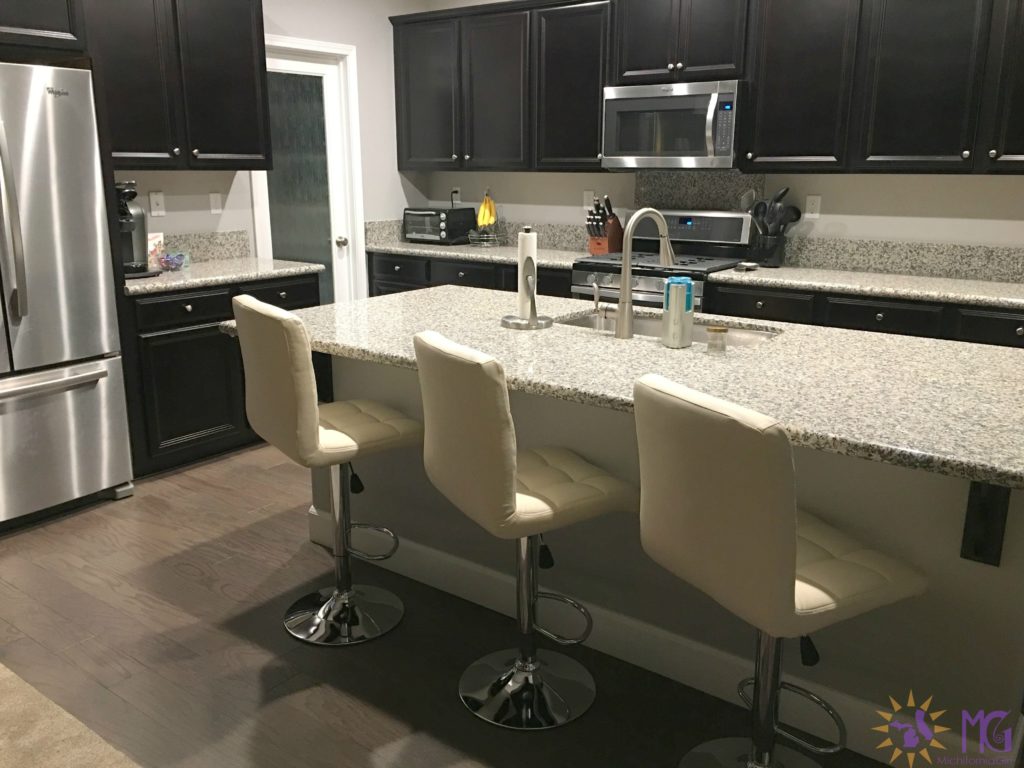 I MIGHT actually be persuaded to try to cook. 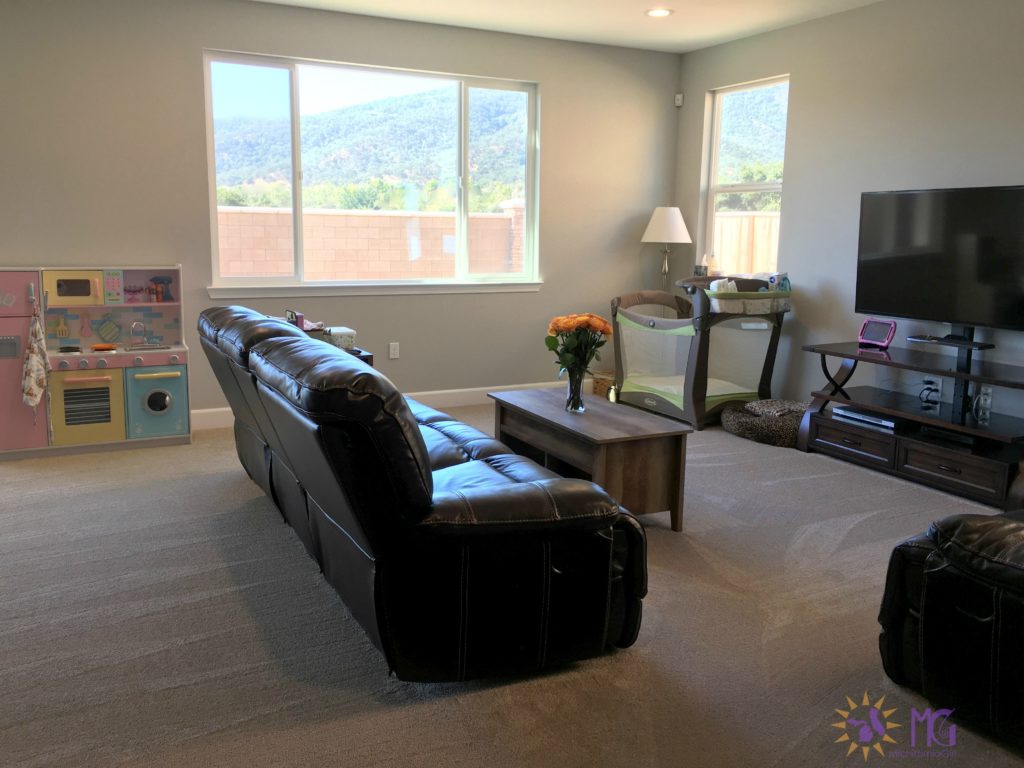 The commute to anywhere is a disaster, but while my kids nap I get to type things from this couch and look out this window and get inspired by this mountain. It’s no cozy summer thunderstorm, but it sure beats all the claustrophobic neighbor-gazing that was happening in The Hub!

Thanks for taking that three-photo mini-tour with me, friends. I’d show you the rest, but, um, that’s where we’re stashing all those still-unpacked boxes.