I first heard about the opportunity a couple years ago at the San Francisco Writers Conference, where I met Heather Lazare, one of the retreat’s co-founders — she’s an independent editor who’s worked at some baller places in New York, and I’ve been creepily stalking the submission guidelines ever since. The retreat is clearly gaining steam; there were more than five times the number of submissions this year than when it launched in 2016. Finally, once Baby B was weaned and fully into toddlerhood, I gave it a shot: twenty pages. Crossed fingers and toes.

When I got the acceptance email, I panicked, because that is what I do best. And then I remembered: SO MANY NIGHTS of sleeping blissfully, gloriously alone!

You guys. I did not realize just how alone we were talking. I knew it was located in a place with a few redwoods and hiking trails, but pulling into the Sequoia Retreat Center feels like getting swallowed by magic, a gigantic Narnia-esque door heaving closed behind you, sealing off the exit.

When I checked in, they gave me a key to a straight-up cabin. 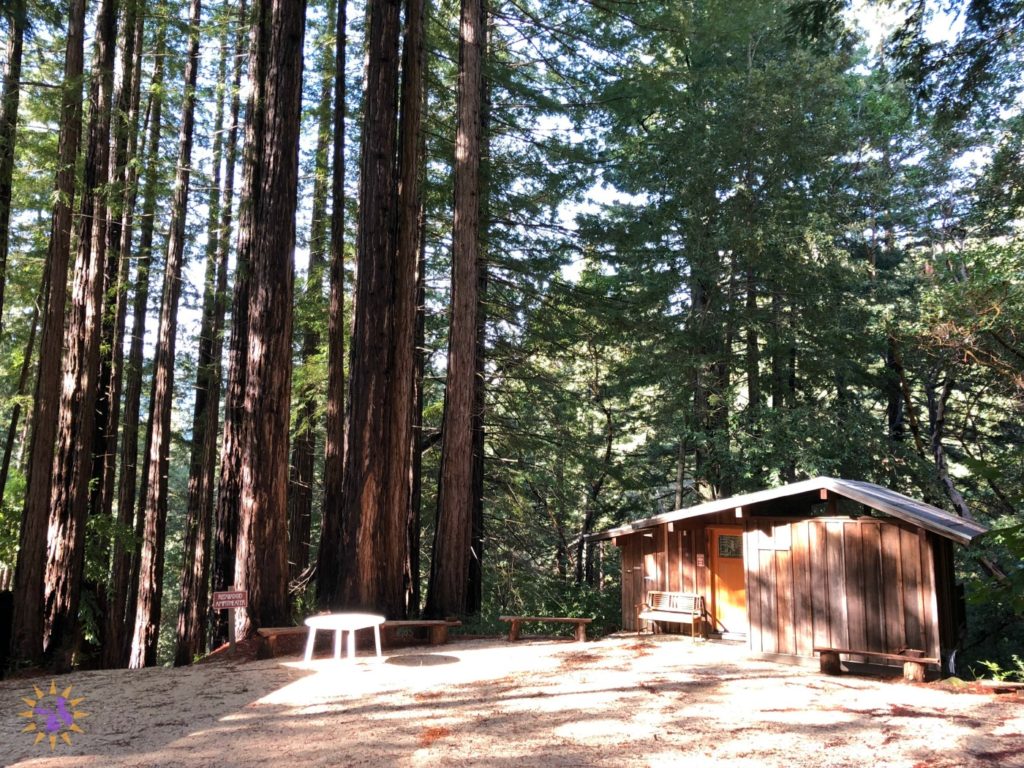 My cabin: front. This is as Henry David as it gets, no? 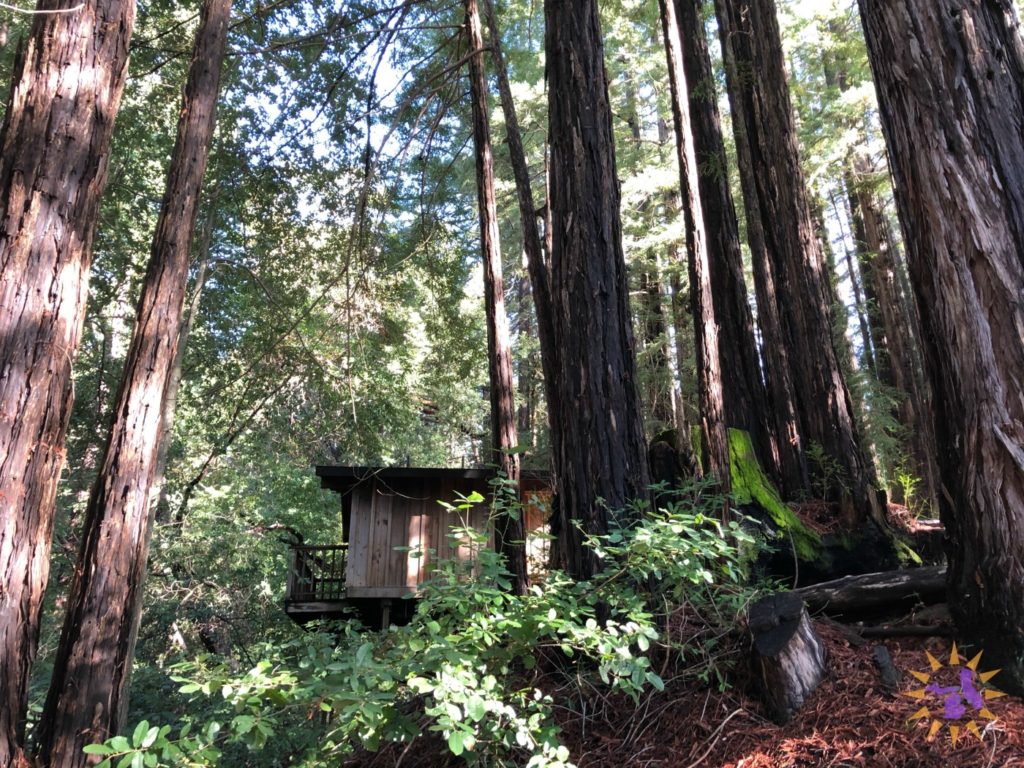 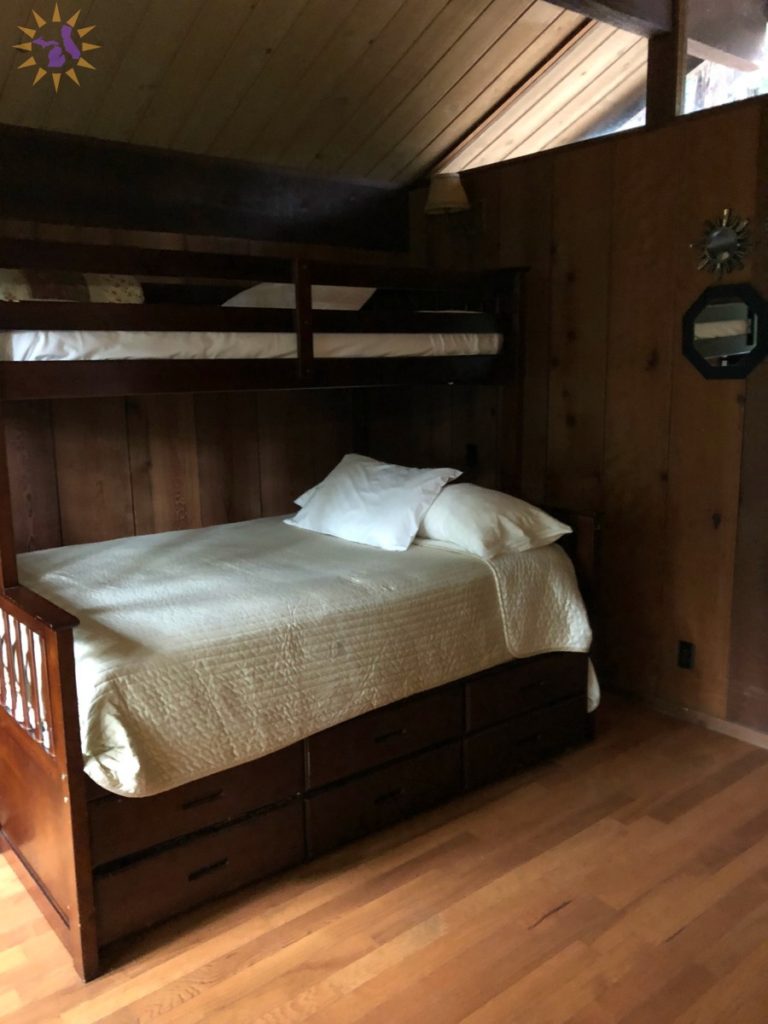 I slept on the bottom. My bunk-bed-obsessed daughter was pretty jealous. 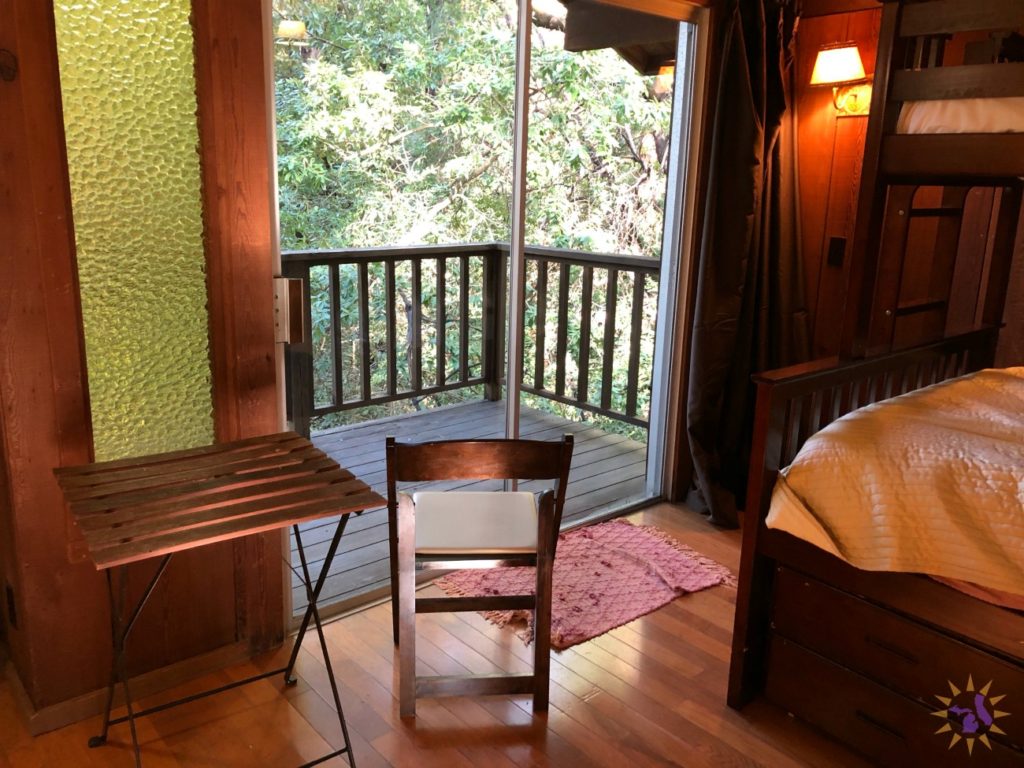 Where I wrote. Love this spot. If it hadn’t rained every single day (except this one, our very last), that chair would SO have been outside!

It was rustic (the Retreat Center even calls itself “rustic-chic”). Bits of bark drifted randomly from the ceiling. Spiders were lying in wait for ants. You got the feeling that if you just casually asked someone, “Hey, where’s the nearest TV?” he’d look at you like it hadn’t been invented yet. We were encouraged to pack a flashlight, which I assumed was merely a suggestion for the hardcore hikers among us, but no — after sunset, you literally could not get back to your cabin without one. Luckily, Heather and Chelsea generously included a flashlight in our welcome tote; otherwise, I’d probably still be wandering around calling for help.

Also, it turns out “a few redwoods” is the biggest understatement I’ve made since the time I told a pregnant friend her life would soon be “kinda different.” 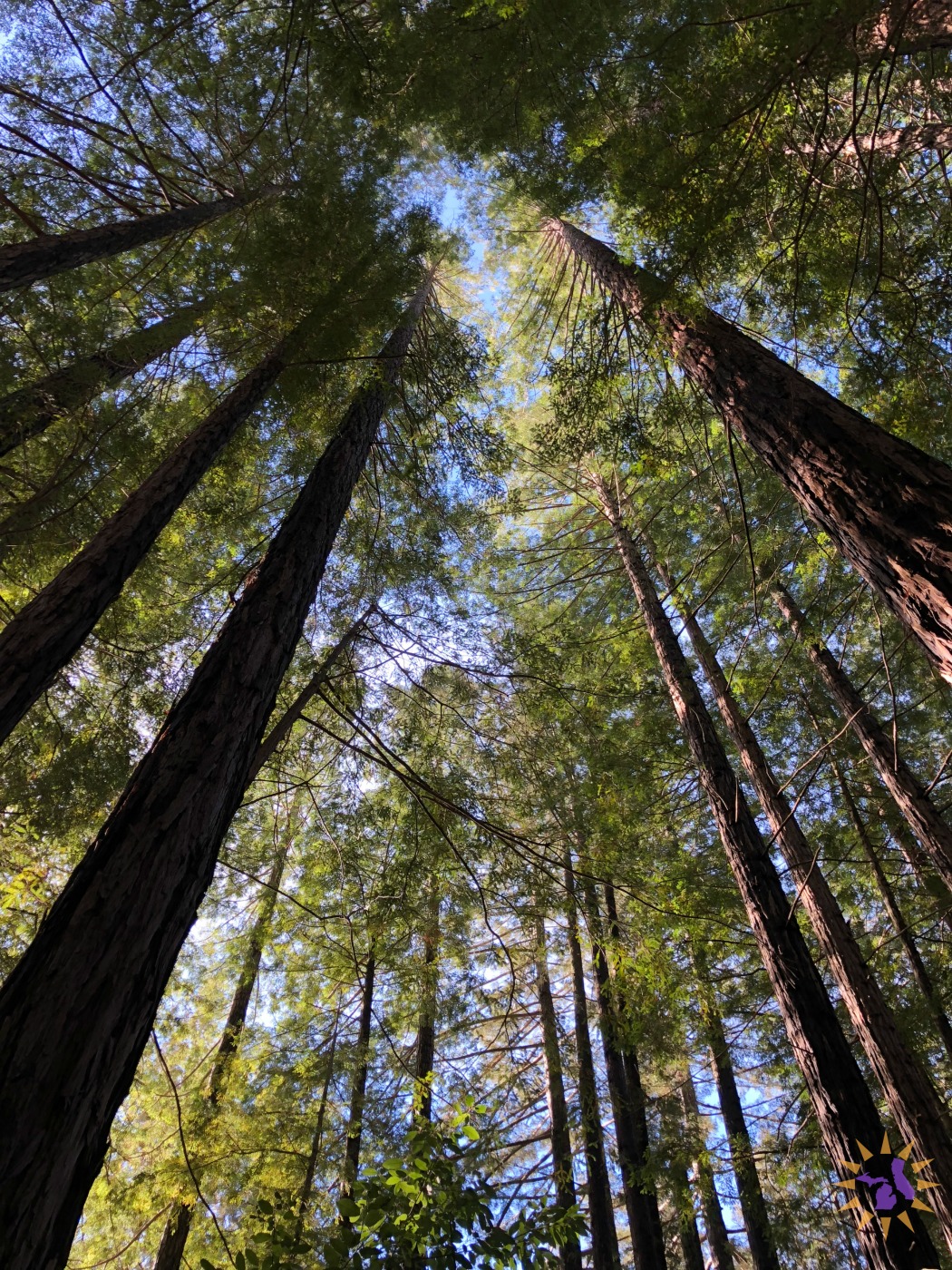 The setting was so breathtaking it felt almost wasteful to look at your laptop instead of your surroundings. I shouldn’t have been surprised — the retreat’s official website has some gorgeous photo documentation — but experiencing that kind of beauty in person was otherworldly.

Even in the rain, which persisted for the full five days. We had to move the s’more party indoors, but the lush sounds and swirling mists made for such an inspiring writing environment. Our mornings were unscheduled: there was an optional breakfast (yes, please), an optional massage (um, YES PLEASE), and plenty of hours to work. Some writers eschewed their cabins in favor of the lodge — it was like a more perfect version of a coffee shop, people writing silently but in solidarity, enveloped by floor-to-ceiling windows and stunning views.

Each lunch featured a “talk,” led by different industry experts: Heather and Chelsea dished about the editing and publishing process, and Anna Ghosh answered questions about finding a literary agent (something that often feels like a pipe dream at this stage of the game). With only twelve writers in attendance, the whole thing was incredibly intimate, and everyone was so gracious with their time and knowledge. The talks took place at one long dining table after we helped ourselves to a delicious buffet — and the food was GOOD. Fresh salads, hot soups, asparagus, salmon, tri-tip. They weren’t messing around.

We also got to know Stephanie Danler, who wrote the national bestseller Sweetbitter (soon to be a series on STARZ). She was our “author-in-residence” — which means she’s someone accomplished who is largely there to do her own work, but is also available to offer insights and information — and fair warning, I’m about to enter Unabashed Fangirl Mode for a minute. Her book is poetic and beautiful, and she, as a person, is magnetic. She speaks softly, contemplatively, with a tone that almost borders on reserved, but she was refreshingly open with us: nothing was off limits. During one dinner, I said, “I’m not sure if you’re comfortable answering this, but…”

“I am,” she replied, without knowing the question.

We were strangers, and she let us in as if we’d been friends for years. Most of all, she was helpful and kind. 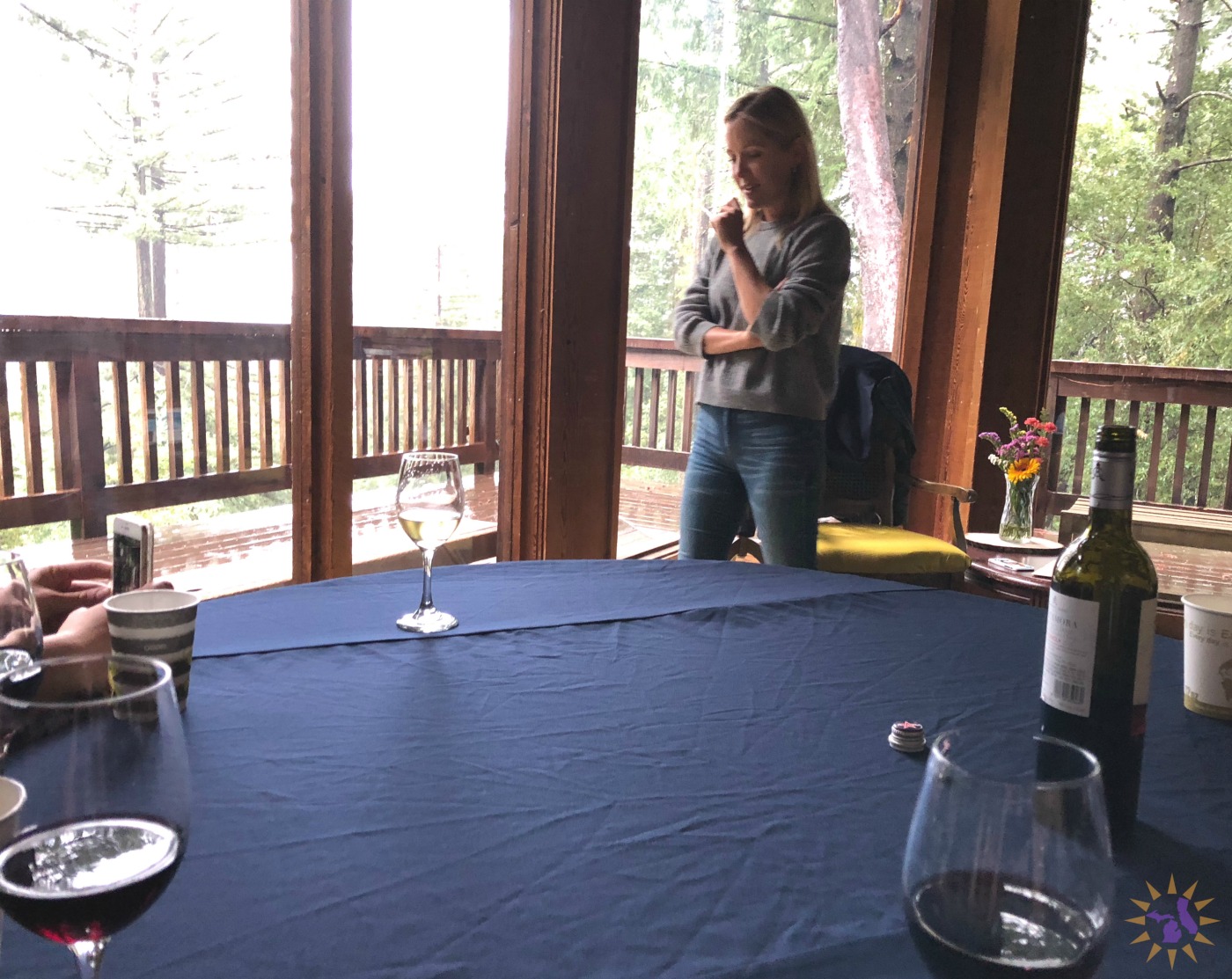 Wine glasses intentionally NOT cropped out because, you know, Sweetbitter.

We also had a chance to workshop twenty pages with the other writers, which was an intimidating concept for me at first. I hadn’t done something like that since college. But it was beneficial to get some feedback, and especially interesting to see everyone’s works in progress — it felt like an extra layer of getting to know each other.

The twelve of us came from all over: Seattle, New York, Boston, L.A. Our dinner conversations, always replete with wine, extended well into the night (and sometimes into morning). We exchanged phone numbers and email addresses, offered to swap manuscripts, and promised to meet up if we ever found ourselves in the same area. Incredibly, it seems the connections we made will last beyond the retreat experience.

Confession: I’m a not-yet-recovering reality show junkie, and every time someone leaves The Bachelor sobbing, I say something super empathetic like, “Mm-hmm, you’ve been there for like a month, how close can you be?” Joke’s on me. I’ve known these women for five days and I’m not even embarrassed to admit I already miss their company. 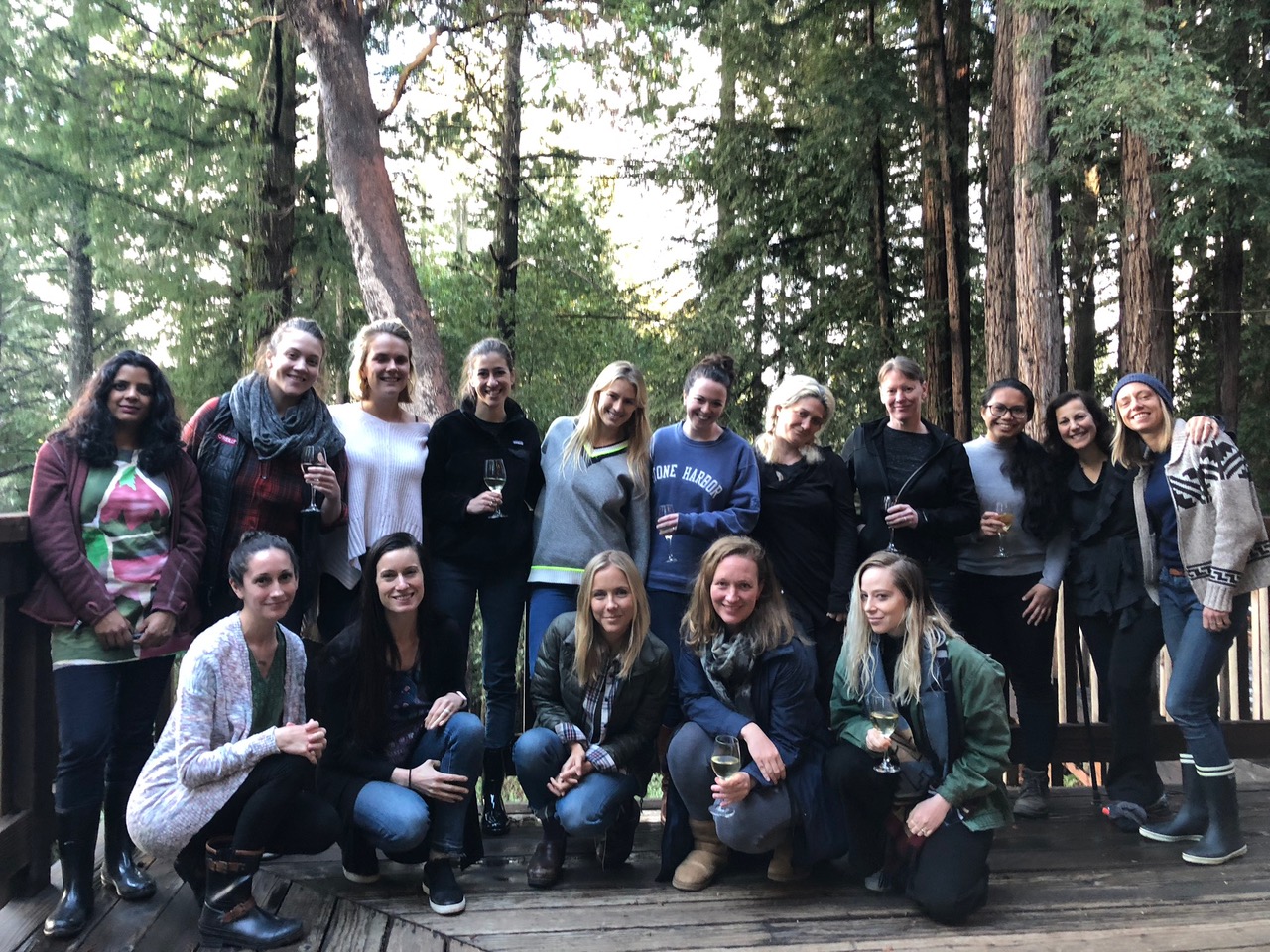 The day we left the redwoods, the sun finally came out, which added to the sense that I had somehow just spent time in a different land. The trees thinned, buildings materialized, and I squinted confusedly at the roads — traffic lights and cars still felt out of place in my brain. By then, I couldn’t WAIT to see my babies. All I’d wanted for the last five years was a second to myself, the chance to focus on my own passions with a freedom and serenity missing from my life these days, but those kids were all I could think about the whole way home. Being a mom is so weird. 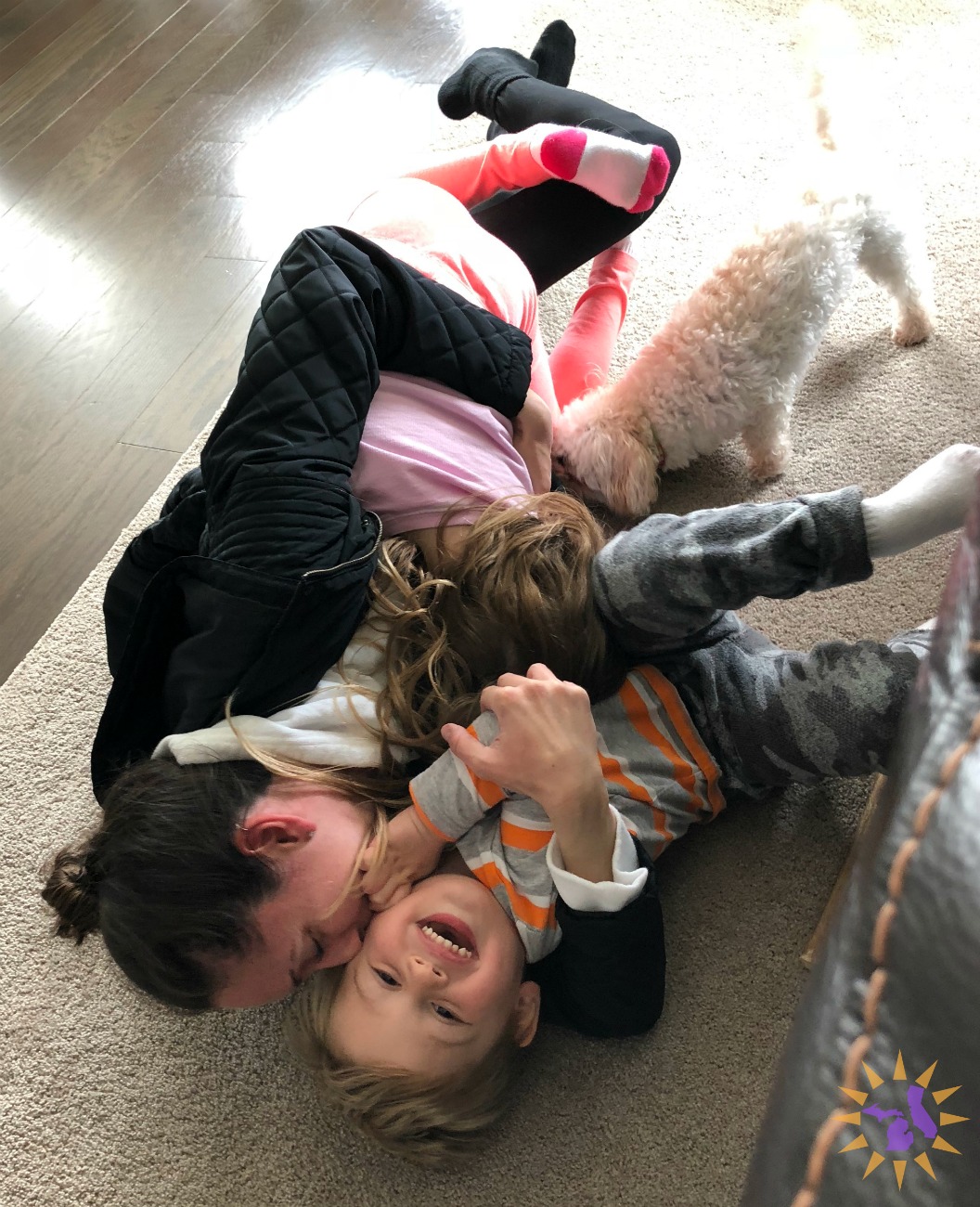 Thankfully, I left them for an absolutely perfect reason. The retreat was restorative and enlightening and exactly what I needed. I came for the solitude, but the best part was the community.