We are back in Michigan for the first time in almost a year, and whoo, boy, does it feel good! Totally worth the four-hour flight with an antsy toddler who refused to sleep.The plan is to be here for most of July, and I’m sort of ecstatic to be surrounded by my people again.

Things I Have Missed:

3. The ability to walk into a store and purchase Michigan clothing and accessories. Yay! It’s such a bummer to only have access to San Francisco Giants stuff all the time. I didn’t realize what a bizarre relief it would be to see Detroit Tigers gear and U of M shirts and YES, I was the one burying my face in the Red Wings jersey and sobbing tears of uncontrollable joy, okay?

4. Ice cold water coming out of the tap (by comparison, “cold” California tap water feels one degree below lukewarm)

6. ALL THE PLACES. All of them. Meijer (miss these so much it’s legit depressing), Jimmy John’s, Black Rock, Biggby, Twelve Oaks Mall, and real pizza from Buddy’s and Jet’s because THAT is how pizza is done, my friends. (Why is there a restaurant called California Pizza Kitchen when the entire state of California has no actual idea how to make pizza? Just wondering.) 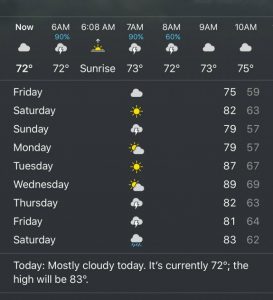 Deliciously unpredictable weather! (And this whole forecast will be different by the next time I check it. LOVE.)

13. Cider mills! I know it’s way too early in the season to really get that special cider mill feeling (tell me you know what I mean), but we went to one anyway, and we bought fresh cider and cinnamon donuts so warm they were falling apart AND I REGRET NOTHING. Then the kids ran themselves silly on a pretty amazing playground.

At least he can’t fall off a tunnel slide.

Things I Definitely Have Not Missed:

1. The roads. SOMEONE DO SOMETHING ABOUT THESE ROADS. They are an embarrassment.

2. The utter lack of mountains 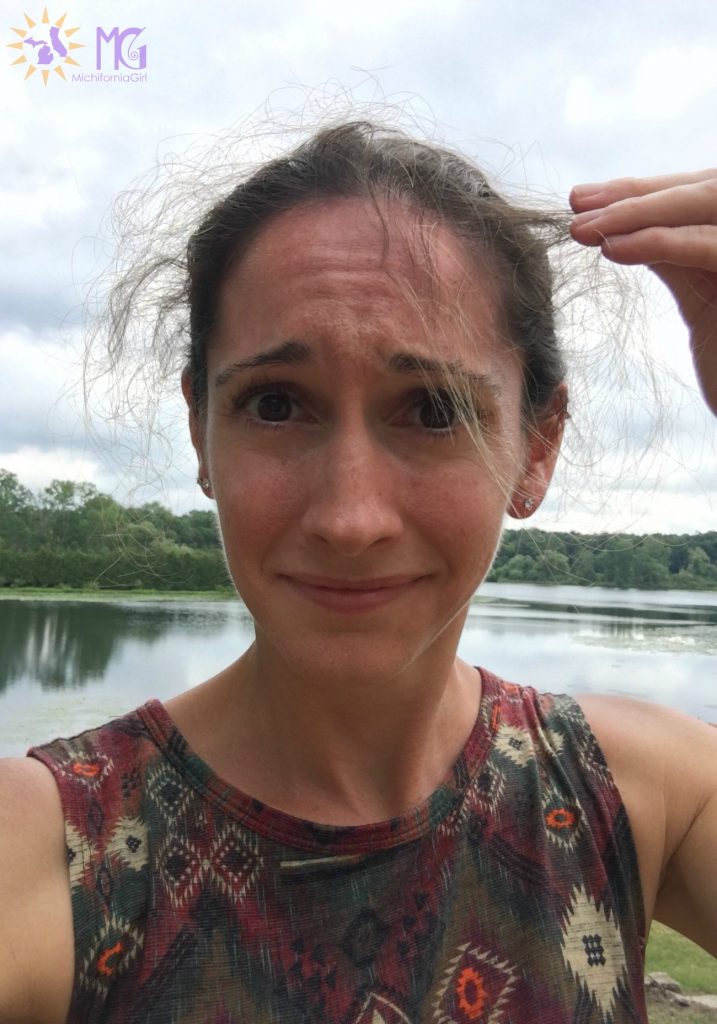 My hair does not look like this in California. Ah, the plight of the curly-locked.

For a bunch of reasons, we chose to rent a place this time rather than stay with friends or family. It was our very first Airbnb experience. I literally created an Airbnb account just because of this trip, and booked a place that is six minutes from my parents and close to just about everything I know and love.

If you’ve been following this blog for any length of time, you may be familiar with the nightmarish housing situation we experienced during our first year in California. But here’s what I am slowly learning: it wasn’t the house’s fault. It was my fault.

I AM A MAGNET FOR DISASTROUS RENTAL HOUSES.

Day 1: We could tell from the photos that the home was pretty outdated, but it seemed promising and there was a rather magical lake view. Done. When we arrived, we discovered that one of the two listed bathrooms was zero-percent operational — and while this wasn’t ideal (single-bathroom situations are sometimes panic-inducing for emetophobes), I said, “No big deal, it’s cool. One bathroom. Got it.”

That evening, after a full day of travel, everyone was feeling nice and disgusting. I could not WAIT for my shower. We attempted to bathe the kids first, and every drop of hot water was gone in less than a minute. The baby, startled, began shrieking, “Get out! Get out!” and P still had soap in her hair. Turns out the water heater was about a million years old and needed to be replaced, so our host — who was initially pretty accommodating — arranged for a plumber the following day.

Day 2: A few hours after it was installed, we smelled something weird. Al asked, “What’s burning?” and he and I sniffed all around the basement and traced it back to the (brand spanking new) water heater. Everything looked okay on the outside, so we tentatively figured it was just breaking itself in. The stench disappeared within three hours. We had a wedding that evening, so I thought I should (finally) try to shower in hopes of looking vaguely presentable.

The water was frigid. I mean, like, arctic-glacier cold. I showered anyway, because someone important was getting married and she deserved to have B.O.-free guests.

Day 3: My dad is an electrician, so when I told him about the weird burn-y smell, he came over to check it out. His suspicions were confirmed: the plumber had installed the water heater improperly, and the odor was a bunch of wires burning themselves into oblivion. 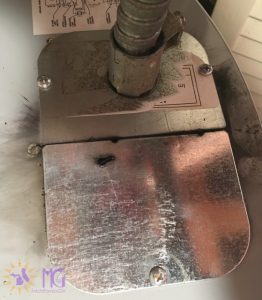 All the wiring underneath that metal panel was totally scorched. Everything got so hot, even the sticker on top was completely obliterated.

Because the house is so old, there is no “arc fault” breaker like there would be in more modern homes, which means this could have caused a major fire. We got lucky. Especially because, upon further inspection, we found THE HOUSE HAS NO FUNCTIONING SMOKE DETECTORS. None. Pretty sure this is illegal.

Day 4: Return of the plumber! We finally have hot water (I think — we’ve all been showering at my parents’ place).

Because it is clearly important that I obsess about safety as often as possible during this trip, I should also mention that fifty percent of the windows and glass sliding doors are broken and do not lock, the garage won’t close all the way, and there are ants on the floor and occasional small, jumping spiders on the bed and a whole lot of bugs that look like this. 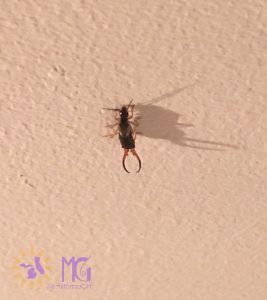 The photo doesn’t do it justice, but these suckers are almost two inches long. I was awakened by one crawling over my cheek at 3 AM.

The host has been texting me regularly, trying to schedule contractors to come in so she can get estimates on remodeling the defunct bathroom. Apparently she has a group of ten people coming in the day after we leave, and “they’ll definitely need two bathrooms instead of one.” Does that mean the remodeling will also have to take place while we’re here? Aren’t we paying for a private place to stay? Is this a typical Airbnb experience? Someone talk to me.

Either way, we have thunderstorms and family nearby for the next couple weeks — and I have to admit, that overrides just about everything.

UPDATE, AUGUST 2, 2017: After discovering a family of mice living behind the cabinet in the one operational bathroom, we FINALLY contacted Airbnb. It took quite a bit of back-and-forth, but ultimately we were connected with a super helpful case manager who seemed appalled by our experience and took care to ensure that we were ultimately satisfied with a fair resolution. Confidence in Airbnb semi-restored.

14 comments on “Back in Michigan: the Good, the Bad, and the Humidity”