I’m not the kind of person who embraces change. You might say I’m sort of averse to it, actually. Or even a little bit afraid.

Okay, you know what? I’m terrified. Like, full-on, break-into-a-cold-clammy-sweat terrified. I don’t even run screaming from it, because then it might notice me. I prefer to hide from change in a silent little bubbled corner and pretend it doesn’t exist, squeezing my eyes shut the way my two-year-old daughter does because she thinks it will make her disappear.

On the other end of the phone was one of my husband’s former colleagues, who had just moved out west to embark upon a new job at The Company. Because there are nondisclosures involved — and because I’m currently shackled to the ideals of a public-teacher persona — I have to use pseudonyms for now. Sorry. Maybe at some point we’ll be free from all that, but for now my husband is Al and my daughter is Peaches (a nickname I actually use for her).

Former Colleague wanted to know if Al might consider a job with The Company. Of course, this would entail moving from Michigan to California, most likely within the next few months. “I know you have a family,” he said, “so I almost didn’t even want to ask. This will be a big decision.”

Made bigger by what Former Colleague didn’t know: just one week earlier, I’d discovered that I was pregnant with our second child. It was news we’d wanted for months.

Al didn’t sleep at all that night. Neither did I. “Maybe I should just fly out and interview,” he said at two in the morning. “Just see how it goes. We can really think it over once we have all the details.”

His interview is in a couple weeks. 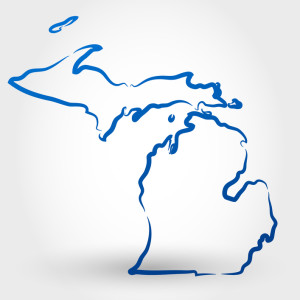 I’ve lived in Michigan my whole life. The same forty-five mile radius, in fact, from the very moment of my birth until right this second. Sure, I’ve had a handful of different houses and apartments throughout those thirty-some years, but even college was less than an hour away from home. I got married here. I had my first child here. My parents still live here. I’ve taught high school for more than a decade here. This is where I’m comfortable. Or is it complacent?

No. Comfortable. Definitely comfortable. No change, thanks. Not for me.

Maybe I should just tell him this is out of the question. This is NOT the right timing. I am pregnant, okay? You don’t just pick up and move across the country when you are with child. You don’t.

But I also don’t want to be the person in his life — or in anyone’s life — to say he shouldn’t go after his dreams. Working at The Company hasn’t been Al’s specific “dream,” exactly; but he gets giddy whenever he talks about the possibilities and has been beside himself about the impending interview. This particular place is so far above and outside what he has ever dreamed for himself that the very idea of it is kind of bursting his whole excited dream bubble all over the carpet of this house I might be moving out of soon.

I can acknowledge that the terror is coming, but for now I get to just fade into a thick cloud of denial.