We have a tentative closing date (May 31)!

Now that we have those things, and because people have been asking, I figured it might be the appropriate time for a new house update.

For the last few months, we’ve been driving to the construction site about every other weekend so we don’t miss any of the progress — and man, does it feel like crazy fast progress. These guys are TRUCKIN’. There are dozens of other homes going up in the area, too, and all of them at warp speed.

SO MANY PEOPLE are coming to this part of California that there’s kind of nowhere to put them. I saw an eye doctor last month who was originally from New York; he admitted the housing prices have gotten WAY out of hand, even since he moved here four years ago. “Some of our neighbors bought homes back in the ’70s and ’80s, and now everybody’s trapped,” he told me. “Sure, the current value of their home is astronomical compared to what they paid — but if they were to sell it, where would they go? Even with that kind of profit margin, they wouldn’t be able to buy anything else in the area. So nobody moves. And people just keep coming here.”

“How did you find your house?” I asked.

When people DO leave The Hub of this area, their only choice is to find something “affordable” (which is literally laughable when compared to Michigan. AFFORDABLE! Hahahah. To quote my friend Cathy, LOLLLZ FOR DAYYYS. I’m laughing so hard I’m crying right now. Um, also, just crying). And all of that “affordability” means you need to live far, far away from everything. Al’s commute to work is about to get INSANE.

Our current rental house is in The Hub, and because PEOPLE ARE EVERYWHERE, they are even in the backyard. 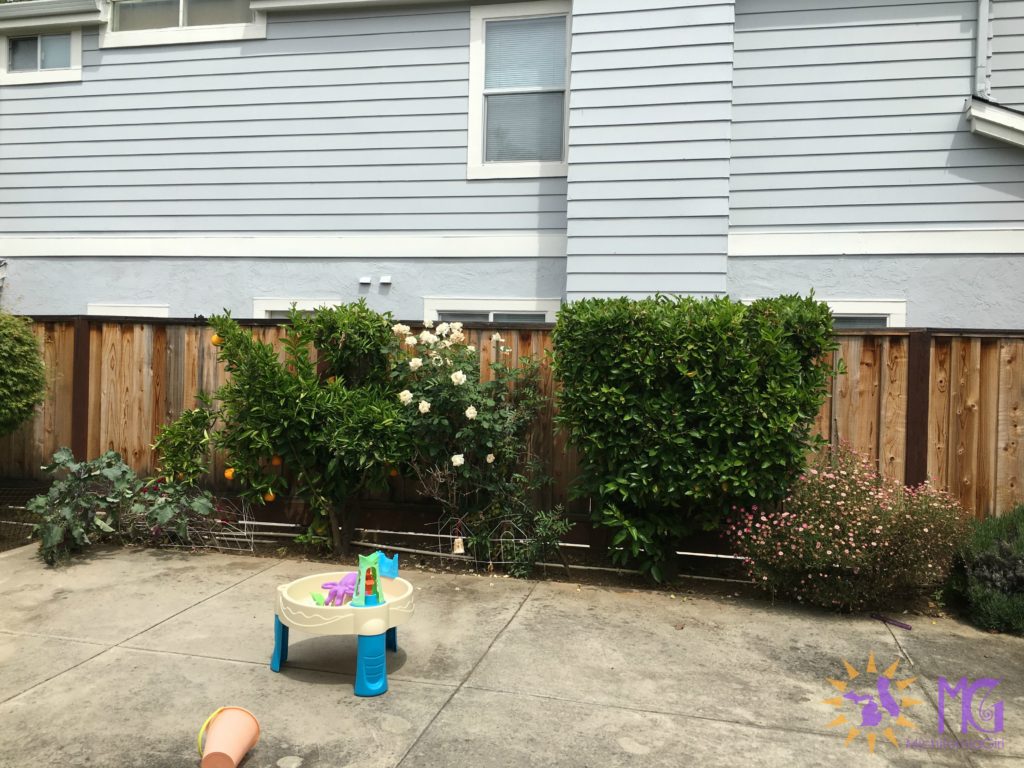 The view from our rental kitchen. Is there still a sky? I don’t know. Haven’t seen it in almost a year.

There are some plants, a “yard” made entirely of concrete, and that guy’s wall. That’s his office up there, actually. I wave at him sometimes. When I’m outside playing with Peaches, it totally feels like we’re in a fishbowl — between that and the rampant, aggressive yellow jackets, we almost never use this space.

In our new neighborhood, the houses are still only ten feet apart on either side…but look! A SKY! And as a bonus, a mountain!

The mark of a truly classy selfie (oxymoron alert!): the phone reflecting in your sunglasses.

This is the view from the master shower. Looks like I might have to start bathing while it’s light out.
Right now, during construction, the new backyard is a muddy mess; but once we’ve moved in, it will basically be my first priority. 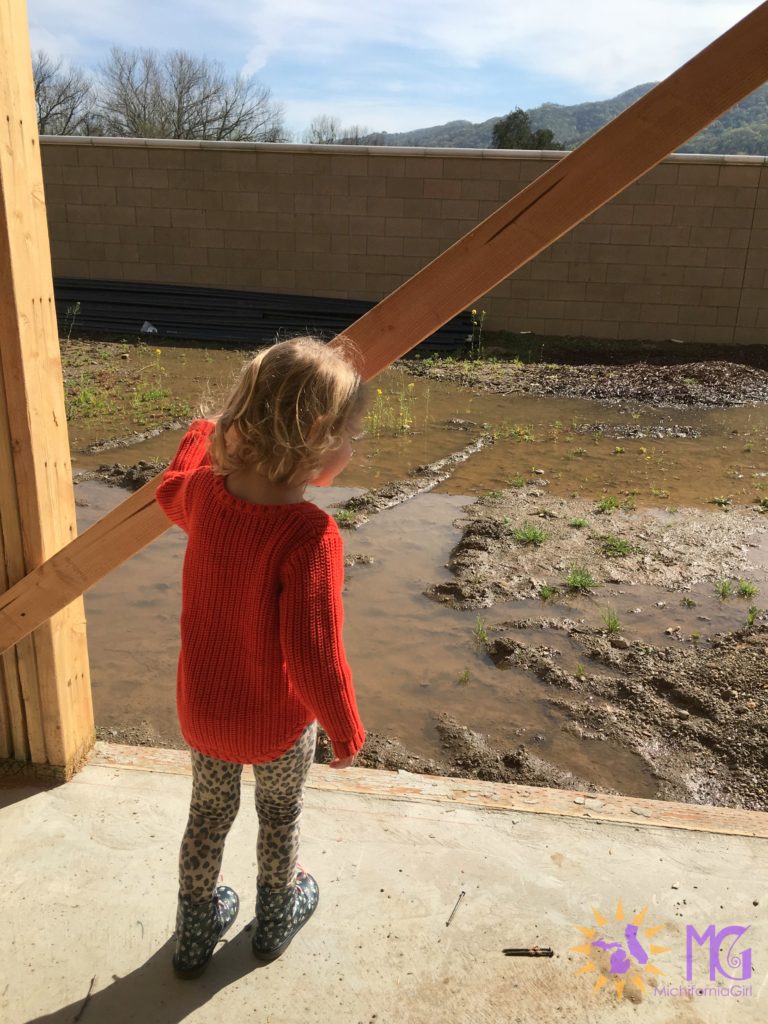 P, dreaming of the possibilities.

The yard is pretty small for Michigan standards, but we will have a LAWN again, with actual grass. You can also get fruit trees for like eighteen dollars at Costco around here. Orange! Lemon! Grapefruit! Avocado! Related: how do we plant all that sweet goodness and still ward off those pesky yellow jackets? Anyone have any tips for a stinger-free backyard?

P absolutely loves visiting the house, which has been a blessing, since getting there requires sitting in a car for a considerable length of time. 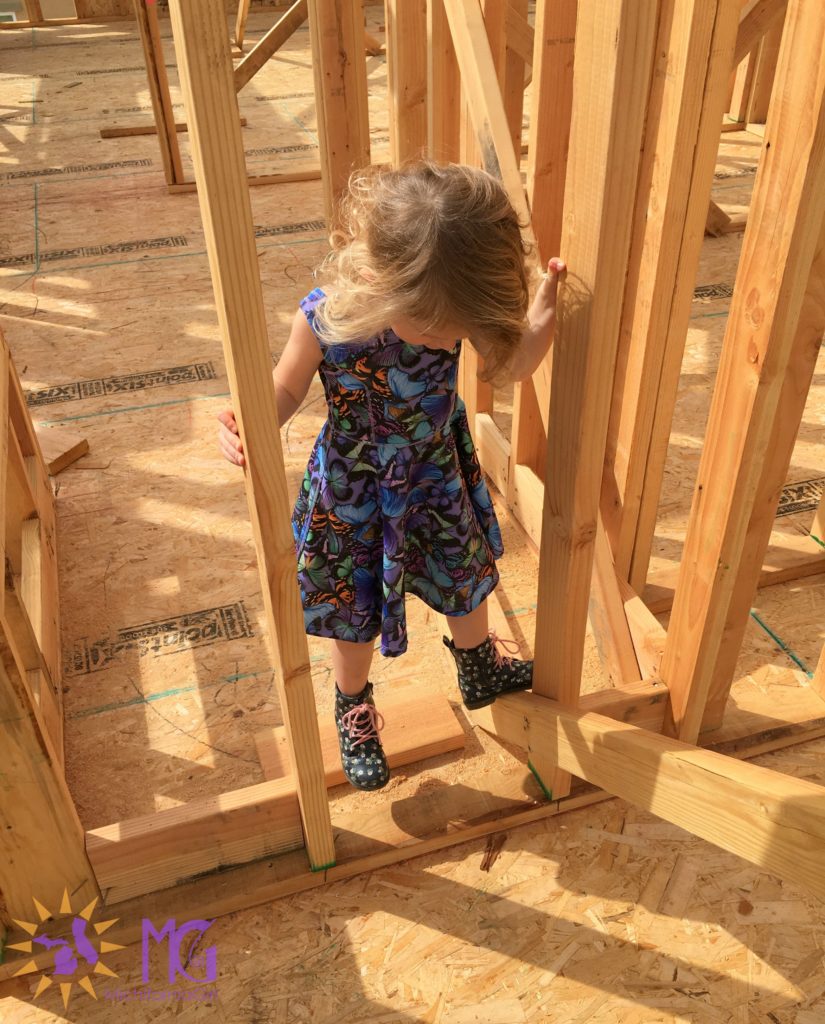 This girl never worries about splinters.

She gets a huge kick out of leading us into her new room and peering out the window. I also have to give her a tour every time we go, and she’s starting to identify things I never specifically explained to her (“And what’s this bathroom? Look, the potty goes there!”).

A couple weeks ago, we took a ninety-minute drive to the middle of nowhere so we could approve our granite slabs. We’ve never had granite before, so this was a new one for me. Here’s a tip: if something looks the least bit busy on a tiny sample, it will borderline make your eyes hurt when you see it full-scale. Oops. 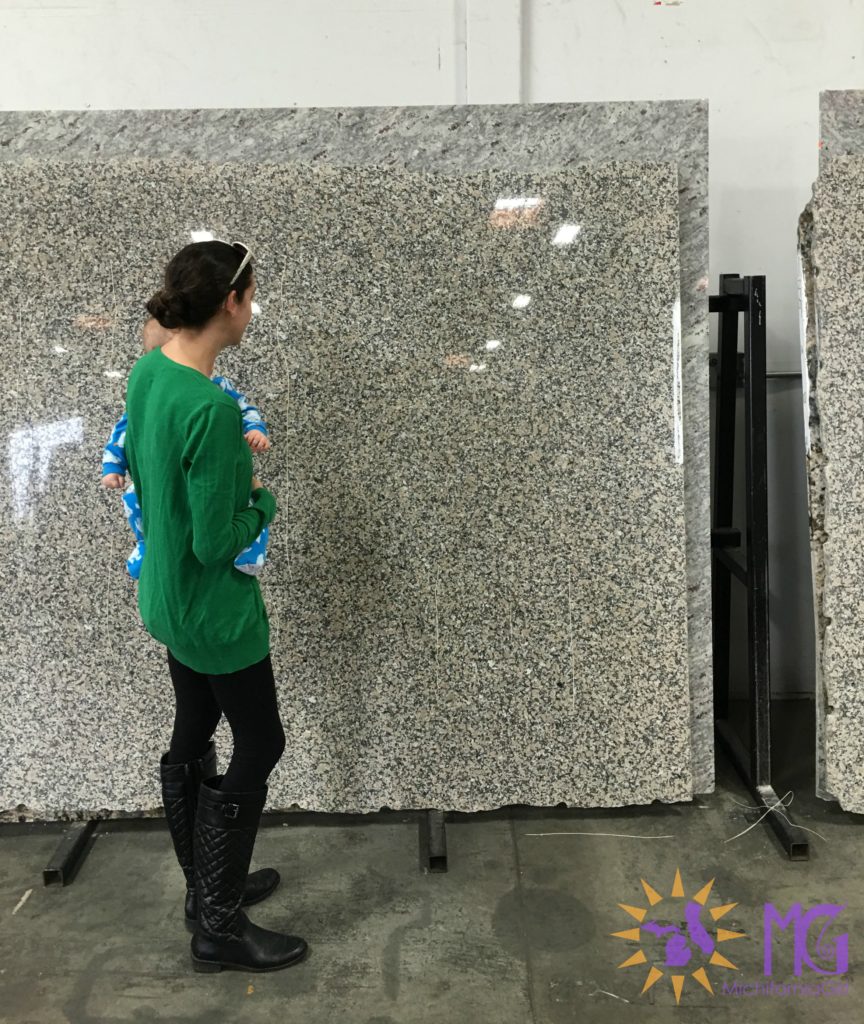 Mulling over — and semi-regretting — our choice.

For some reason, in my mind I thought we’d gone with something lighter and whiter and much more plain, with subtle marble-y swirls. This is not what I remembered. Al kept reminding me that we’d picked this one when we saw it next to our cabinetry and flooring, and at the granite warehouse there was just the granite and therefore we were missing the overall picture. Much too late to switch now, anyway, so…APPROVED.

When we visited the house this past weekend, the wooden framework was naught to be seen again. We had actual drywall and a shingled roof. I stood in the place where the kitchen island will be and tried to imagine what it might look like at our final walk-through in five-ish weeks. 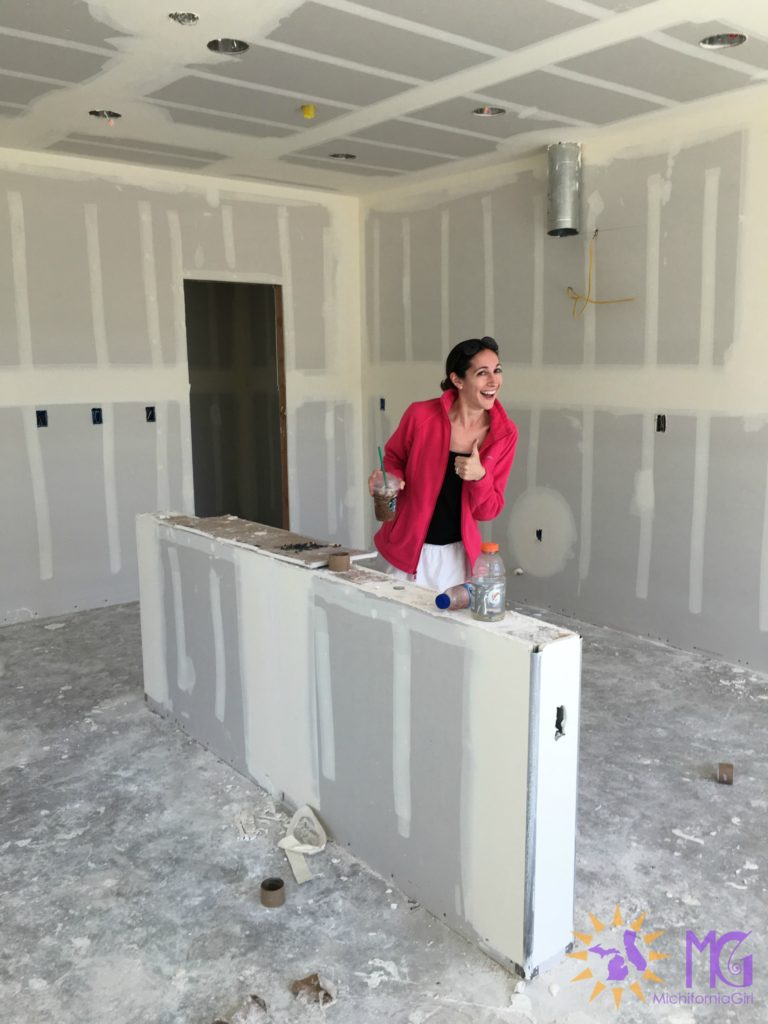 Food, hands, dishes: I spend an immense amount of time washing things. I will be in this spot A LOT.

Five weeks! FIVE. WEEKS. Technically, it will mark our third move in just over a year: last May, we moved away from Michigan and into California temporary housing. A month later, we moved into our current rental house. And this May, Lord willing, we’ll close on some new construction and hopefully get settled in by the end of June.

I find the house itself — the actual, physical structure — super exciting. All the newness. All the cleanliness. The gorgeous view.

Per usual, though, I’m not devoid of worry, and right now there are two biggies on my mind: the commute and the schools. It breaks my heart to know that Peaches has to change preschools AGAIN, and since we will no longer be in The Hub, our options are much more limited and not quite as top-notch. I still haven’t found something that has impressed me.

But I leave you with the absolute best image of our new house: a twirling, swirling P, unafraid of change, in her “spinniest” dress — because that’s the only kind of dress she finds acceptable, naturally, even when she’s headed to her construction site. 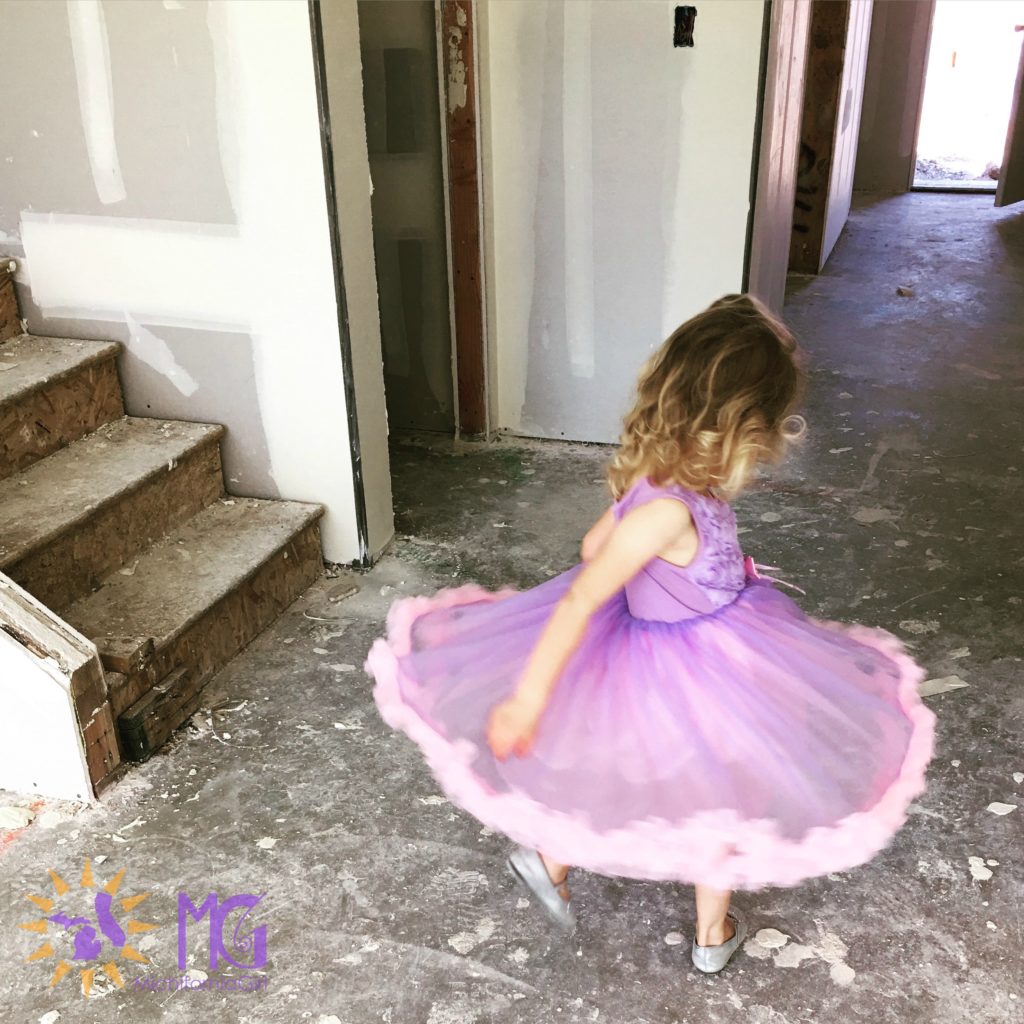