“Did I ever tell you the one about the skeleton key?” he asked, leaning back in his chair and folding his hands.

If Grandma was the giving, earnest matriarch of the family, Papa was the storyteller. His job as a private investigator amassed him many a tale, starring everything from cheating spouses to ghosts. He cheerfully, heartily embellished until the line was blurred: in true Big Fish style, we sometimes wondered which of his fantastical anecdotes was rooted in reality.

He scrawled poems, short works of fiction, and love letters to Grandma on napkins and pieces of scrap paper, and eventually documented his unthinkable World War II experiences chapter by chapter. He had a story for everything. Everyone told me I must have inherited my passion for writing from him; so forever, from the time I was three years old, I dedicated everything I wrote to Grandpa Joe.

Trapped as we were around the dinner table, same as every Sunday, I knew my siblings and I would have to hear The One About the Skeleton Key again. And then probably something about the war. Why do grown-ups always tell the same stories? I wondered, settling in. It was exasperating.

Of course, I loved my grandparents. Even at seven or eight years old, I knew how lucky I was to have such a close relationship with them, how fortunate I was to see them several times a week. Not every kid had that. When I slept over at Grandma and Papa’s, it was special. I got to go through antique jewelry boxes and hear about each piece. I got to drive around the park in the passenger seat and search for deer. 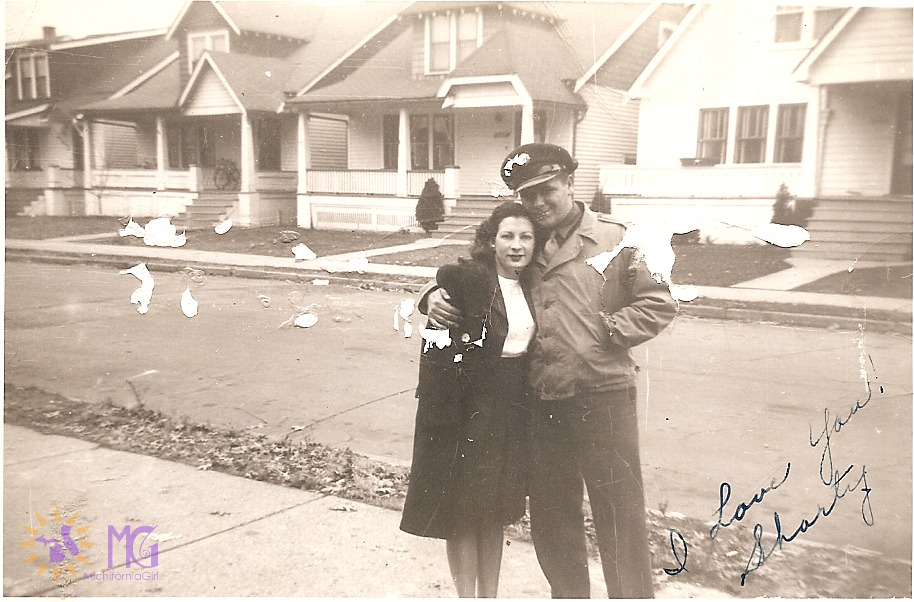 They took me everywhere: to the dime store so I could pick out a trinket; to the playground with the enormous wooden play structure that has since been torn down and replaced with something small and safe; to the frozen pond nearby so I could practice “ice skating” in my snow boots.

But man, they needed some new material. By the time I was a teenager, I’d grown tired of listening to the same old jokes, the same recycled memories. There were, like, so many other things I could have been doing: reading, or writing in my diary, or watching a movie, or hanging out with friends. I started to tune my grandparents out. I let the details of their lives slide in one ear and out the other, and I did not fight to retain them. I’ll hear all of this again next Sunday, anyway, I thought, melting into my self-absorption, and I sat restlessly at the table and gave them half of my attention.

And then one day there were no more stories.

When someone dies, his voice dies with him. I knew this, of course, in the same vague way you know that the universe is filled with stars too far away for you to touch. Such a rich history of experiences, an incredible wealth of wisdom, existing only within a mind that is now at rest. The onus falls on the surviving generation to keep those stories alive, and I was not listening as hard as I should have been. I should have listened with every single fiber of my being. I should have listened so intently and absorbed his words so fully that there would be no room in my brain for anything else.

I would love just one more Sunday.

Now that I’m the grown-up in this story, I understand nostalgia. I catch myself recounting a few repetitive tales to my children, my husband, my friends. There are some moments I just want to relive – and as my babies grow, that collection of moments will certainly grow with them.

For now, my kids are young enough to actively want the same stories. My daughter actually asks for them, again and again, often to the point of exhaustion. But someday I may be the one sitting at the dinner table hoping to be heard, wanting to impress upon my children and my grandchildren the most important layers of my life, trusting that those memories will survive in them when I am gone.

Maybe this is why I am sometimes overwhelmed by the power of the written word: it remains, even when the author does not. Papa frequently put pen to paper, but not often enough; and when he was too weak, Grandma wrote for him while he dictated, sometimes into a tape recorder. They only thought to do this toward the end. Who knows how many stories went untold?

They’re still wonderful teachers, even though they’ve been gone for years by now. Call it a New Year’s resolution — or just a lesson learned in hindsight — but I vow to listen harder. I vow to teach my children to do the same. Despite the crazy, messy, complicated twists of the past year, I want to be RIGHT HERE in each moment, not thinking about the things I could be doing instead or the things I used to do. It will take lots and lots (AND LOTS) of practice, of course, but I promise to try. I don’t often make resolutions, and when I do, it usually involves a habit I’d like to break — but these are habits I could stand to adopt.

My Papa always hoped to have his work published, but he was too busy being wholly selfless to chase his own dreams. This poem is a few days – or perhaps dozens of years – too late, but it was one of his favorites.

Why the Chimes Didn’t Ring
By Joseph Booth

I glanced out of my window
At the gently falling snow.
The street was full of people;
Christmas shoppers on the go.
“Silent Night” was loudly blasted
From a juke box down the block,
While a gargoyle Santa twisted
To the “Hallelujah Rock.”

Then I saw an old man stumble,
Fall full length in the snow,
In the midst of all those people;
Christmas shoppers on the go.
He tried to rise, but couldn’t
And he cried out in despair.
They could have helped, but wouldn’t.
They just left him lying there.
They walked around the figure
Of the old man in the snow.
Those cold, unfriendly people;
Christmas shoppers on the go.

The clock was striking midnight.
Not a soul upon the street.
The old man moved and wakened,
Then got slowly to his feet.
There was a glow of light around him
As he disappeared from sight.
There’ll be no chimes this Christmas
And a truly silent night.

You wished to see your words, and your name, in print, Papa — there they are. My blog is not the New York Times, or the Washington Post, or USA Today, but people are reading. I promise to do my best to carry on your legacy. I hope that you are proud.

I still write all my stories for you.

12 comments on “One More Sunday”