Well, mostly. The last couple weeks have demonstrated that an alarming number of people are super confused when it comes to identifying the underlying theme of something (which makes the English teacher in me curl up in a ball and sob a little bit). So this time, I feel like maybe it’s important to be literal up front, to just come out and SAY what this post is about.

And since this is a post about irony, here’s your first ironic snacklet: my husband begged me not to write this follow-up. BEGGED.

You may remember him from the pictures — the husband I “disrespected” by “airing [our] dirty laundry” for the whole world to see, the one who should be all pride-wounded and mortified that I have done this to him. That same husband turned to me on Day 3 of the viral craziness and said, “Controversy is a good thing, babe! You shouldn’t do anything that might stifle it. Please, please, don’t explain or respond.”

I nodded (probably unconvincingly). In the space of just a few days, the Love Your Spouse post was viewed more than 4.3 million times. My site crashed on three separate occasions.

Yes. This had to be a good thing.

So I continued to let my stomach drop each morning as I awoke to hundreds of unsettlingly hostile emails. I learned to skim the first two lines before deciding whether or not to finish reading. My face hung in a semi-permanent, nervous state of flush — because, while investigating a possible heart condition, it is an incredibly good idea to write a post that somehow makes a bunch of people want to kill you. I responded to dozens of interview requests, from marriage therapists (all of whom had fabulous senses of humor, thank God) to TODAY Show writers to Ashton Kutcher’s media outlet. Scary Mommy picked it up. Parents magazine ran a piece about it.

And finally I thought, I don’t know. There might be just a little more to say.

Behind the Scenes
Psst, you guys: My husband was in on it. He helped me brainstorm ideas for the seven photos. He went with me to buy the ridiculous amount of beer for the fridge. He set up our cheap-o tripod and hit the timer button on my iPhone and leaped into the scene just before the shutter activated. 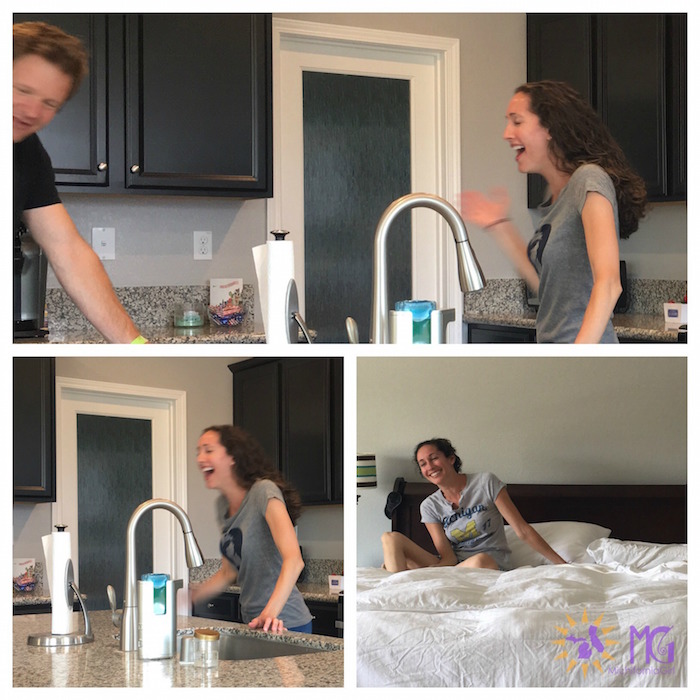 At first, we figured our friends and family might get a kick out of the (staged) candor and that would be it. He read the entire thing before I hit “publish,” and the next afternoon I shared it with my 916 Facebook followers. Several minutes passed before anyone acknowledged it (thanks, Aunt Becky!). I went to get the kids up from nap and sort of forgot the post existed.

But by the time Al got home from work a couple hours later, it was taking on a life of its own…and within a week, it had over half a million likes and shares.

Perplexingly Polarizing
Almost everyone who shared it recognized the levity of the post, and I appreciate you endlessly. I don’t know how to thank you the way you deserve it — for helping me carve out a new non-teacher identity in California, for your kindness and support, and for making me feel like I’m writing for a reason. It is not your job to do that, so thank you, thank you, thank you for being here.

But a glance through the comment section of that particular post tells a different kind of tale. Hundreds of disgruntled people flooded to my site, frantically waving their IN DEFENSE OF THE LOVE YOUR SPOUSE CHALLENGE! e-banners. They wrote seven-paragraph dissertations, lambasting me for all manner of things. I was suddenly glued to my phone and my laptop for what seemed like hours at a time, confusedly trying to make sense of the angry responses…until one morning I looked down at the baby while he was nursing, and my eyes refocused.

I have not seen my son’s face — REALLY seen it — in almost two full days.

It was unacceptable. I was dismayed by my own behavior.

From that point on, I made a concerted effort to minimize my “working” minutes, and to spend them engaging only with the emails that were kind.

Now that things have settled down a bit, I’ve finally been able to take a peek at all the backlash — and it’s not upsetting. It’s baffling. So instead of FAQs, I offer you…

IRONICs: Instances of Relatively Odd Negative and Irate Comments. (All of the following are actual quotes.)

“You obviously missed the entire point of the Love Your Spouse challenge.”

Ironically, these people missed the entire point of my post…which wasn’t really about the challenge at all.

After countless conversations with friends, colleagues, and my high school students, I’ve been itching to write something about the “Facebook Highlight Reel” for a while now. The Love Your Spouse Challenge just served as a handy vehicle for that.

“If you don’t know that Facebook doesn’t represent a person’s whole life, you’re a naïve idiot.”
“No one’s life is perfect. EVERYONE knows that.”
“You shouldn’t be comparing your life to anyone else’s. Stop it.”

We “shouldn’t”…but we do, and we always have. Standards of beauty — different ones throughout the years, but standards nonetheless — have existed since the dawn of time, and this is not dissimilar to that.

Social media, as with ALL forms of media, has a tendency to breed comparison. I liken the effect to what happens when people are bombarded by images of retouched, super-skinny models: after a while, they might start to wonder why they don’t look like that, why they can’t measure up to this version of “normal.”

Are people “idiots” for flipping through a Victoria’s Secret catalogue and suddenly feeling acutely aware of their own thigh size/breast size/stomach size? People KNOW those pictures are airbrushed and Photoshopped and that not everyone is ninety-seven pounds, but we do not tell them, “You’re an idiot. Stop it.” We do not say, “Get over it. You KNOW that’s not reality! Duh.”

No. Instead, we push back. We push magazines and the media to include more versions of realistic bodies. We push our daughters to understand that they are beautiful exactly the way God made them. We push ourselves to remember that we need to love the person in the mirror, “flaws” and all.

Same with the rest of our lives.

“Of COURSE I only post the good times! No one wants to hear your sorry griping!”

Word. Treating Facebook like a heavy-handed tell-all is not a fantastic idea (though I’m sure everyone has a few of those friends).

I do not hope everyone deletes their happy pics and replaces them with ugliness and misery. I will continue to post my shiny, sparkly photos, and so should you. We log in to meet your newborn baby and see your trip to Maui and celebrate your new job. That’s why we’re there.

The thing is, I wasn’t talking to Photo-Posting You. I was reaching out to Facebook-Browsing You, just in case someone needed a lighthearted, comforting reminder that no one is perfect, and that those imperfections are more than okay — they can be celebrated, too.

“The challenge is meant to be positive, and the world NEEDS more positivity, you bitter, horrible person/judgmental, pitiful grump/self-righteous millennial/pretentious old bitch.”

Ah, yes. Yes, it sure does. And thanks for doing your part.

Negative posts about positivity. Because irony.

“Let us post our happy pictures if we want!”

I’m, um…I’m…letting you. Don’t worry, okay? I’m “letting” you. I mean, I just kind of wrote a playful little opinion piece. I’m not storming the Capitol trying to get something signed into law or anything. The President hasn’t even contacted me about it yet.

I know, it’s weird. I expect a call from him any minute. But it looks like we can all still post freely for now, regardless of what some random writer says on the interwebs. Whew.

“Stop shaming us! People will shame anyone for ANYTHING these days! …Shame on you.”

I can’t even with the irony here. Hey, whoa…that might officially be the first time I’ve ever used “I can’t even” for real.

“No one’s kitchen counters are that clean…guess we’re not the only ones who are fake!”

It is a sad, sad tale, but you, too, can get countertops that resemble the pictures. Here is a brief tutorial:

1. Develop a certifiable phobia.
2. Clean excessively to avoid illness.
3. Move into a new house just a few weeks before taking said photos, wherein every item you own has recently been unboxed and put away.
4. Allow three-ish days to pass. Remember germs. Clean excessively again.
5. Repeat.

It’s super fun, you guys. Highly recommended. Also, can I have your therapist’s number? Seriously, though.

Oh — speaking of that, none of those marriage therapists reached out to offer their services. They just wanted to remind people that it is “healthy and therapeutic” to be able to identify (and laugh at) their issues — marital or otherwise.

Psychologically, I have to admit that I find all the animosity a little fascinating. How did seven fairly benign photos — of someone else’s marriage — cause hundreds of strangers to react so defensively?

When Glennon Doyle Melton announced earlier this month that she was separating from her husband, she added a beautiful P.S. to her post: “If my news [evokes strong feelings in you] today, please look inside and get curious about whether those feelings have more to do with you and your life than they do about me and mine.”

A wise request. It’s time to take a look within.

So while my husband begged me not to write this follow-up, I figure there’s always next month for articles about kids or teaching or all the ways California is still a little confusing. Hopefully he’s not too upset when he finds out I went ahead and posted this anyway.

I don’t know. I might just have to interrupt that argument to ask if he’d mind setting up the tripod.

15 comments on “Well, That Escalated Quickly: Behind the Scenes of a Perplexingly Polarizing Post”