We’ve been back in California for a week now, and while I enjoyed our Michigan visit immensely, I returned with the vague feeling that I don’t quite belong anywhere anymore.

Don’t get me wrong: in a lot of ways, it was the most relaxed I’ve been in months. It was incredibly fulfilling to be with our family and friends again, and SUCH A RELIEF to know that help was nearby if we needed to call upon our village. I was able to just zip away to brunch with the girls. I was able to see P and B fall in love with their grandparents again. I was able to have an actual dinner with my husband. There were way more sets of hands to change diapers, give hugs, and mold Play-Doh. My daughter’s tantrums (a very recent and totally unwelcome occurrence in our household) vanished after just a few Michigan days. She was a better person when there were more people around to love her. We were all better people, I think.

But, to my surprise, there was also a sense of calm when we returned to our California rental. It was nice to crawl back into my own bed, to restock our own fridge, and to have access to all of our clothes. I feel guilty that stuff and things can make that much of a difference, but for me I think it’s more about returning to some kind of routine.

And the time change was KILLER. Not for us, so much, but for the kids. Who knew three measly hours could take such a toll? Peaches adapted to Michigan time after a couple of days, but the baby took much longer. By the time he seemed like he might start shifting to EST, there were like two days left, and so at that point we consciously tried to avoid the switch because then we’d have to go through the whole thing all over again back in California and no. No thanks. Oh, also, in the eleven days we were there, our not-yet-five-month-old son went up another size — he is now firmly in twelve-month clothes (!) — which rendered all of his packed outfits unusable. Ahh, my gentle giant.

I was sort of an emotional mess a lot of the time. I cried when I first set foot back in DTW (and then again when my parents surprised us at baggage claim). I cried when I went to Meijer for milk. I cried in Twelve Oaks Mall. I laughed with maniacal joy at all of the beautiful, gloriously large parking spots and all the SPACE — so much space — everywhere. It was so wonderful to be among things and people that I recognized.

As I mentioned earlier, though, I was also surprised to learn that there are some places I do not belong.

The Airport. I’ve always been irrationally uneasy about flying, but man, before kids, that was some wasted stress. I wish I would have savored the ability to sit quietly for several hours in a row and just read something.

Baby B smiled at everyone — as did I, apologetically — as we boarded the aircraft to Michigan. But the SECOND we settled into our seats, he lost it. Like, SCREAMED HIS HEAD OFF, quite uncharacteristically, I might add. He wanted to nurse basically nonstop for four straight hours (maybe that’s why he went up a size overnight), and I obliged to keep him quiet. He did take two thirty-minute naps, but was awake the rest of the time. He also saved a big fat poop-splosion for mid-air after eight consecutive days of no such activity. So that cheered him right up. As for P, she was glued to her tablet because she never gets to use it anywhere except the plane.

On the trip back to California, P was the one who melted down. There was a flight delay, and by the time we boarded, we were well beyond her nap window and it was exactly thirty-seven minutes of Tantrum City for no particular reason except that she didn’t want to sit still. So yep — that was us. We were those people, and at some point in my distant past I swore we’d never be those people, but there we were. (For what it’s worth, I don’t think it’s a coincidence that the tantrums returned THE VERY DAY we left Michigan.) B nursed the whole way back, too, and was much more fussy and much less sleepy than the first flight.

Also. He is the size of a twelve-month-old but he has five-month-old capabilities, so his head is still pretty wobbly and he is all flailing arms and stiffening legs and it is REALLY DIFFICULT to hold him in one spot on your lap for that long. His toys and burp cloths and the pacifier (which he still refuses to take) fell to the floor constantly, as did many, many other items that I was desperate to keep sanitized. (Thank you to the surrounding passengers who continued to pick up the airplane pillow I was using to support my elbow while I fed the baby. Thank you also to the generous grandfather-type in first class who brought us all of his expensive snacks, including his cheesecake.)

By the time we landed, I felt like every part of us was disgusting. Nothing was clean. Everyone was exhausted.

My hair was frizzy and all over the place and any trace of makeup I’d applied to my face had surely migrated elsewhere. And then I got to wait with the baby while Al and P set off to get the car from long-term parking. Al figured it would be easier than lugging everything and everyone on the shuttle, but the whole process took like a hundred hours and before I knew it I was alone in an eerily empty airport FOR. EVER. 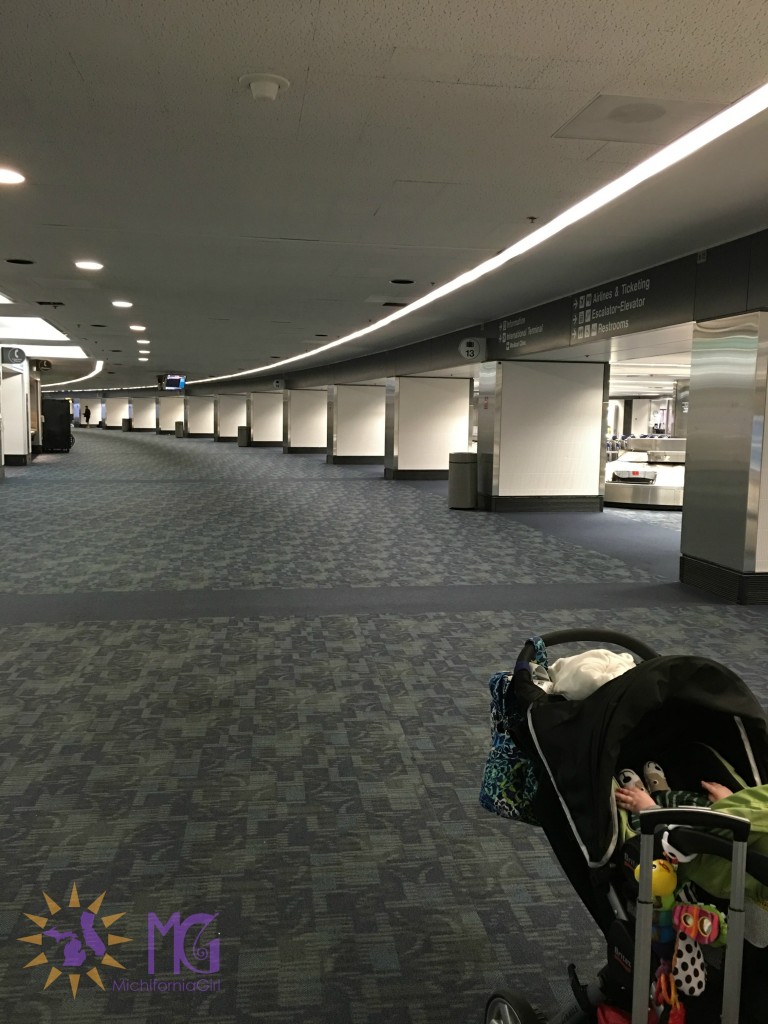 Wait! I think there’s a man down there! ONE. MAN. Hello from the other side…

Clearly we did something wrong. There were other people with kids on our flight, so where did they all go? Why was I the only one left in baggage? We obviously don’t know what we’re doing. I can only conclude that we probably shouldn’t fly again until the kids are in college.

My old job. I’ve been missing that dumb ol’ high school a lot, so I COULDN’T WAIT to get back and see everybody. Classes resumed on the day of our return flight, and I had just enough time to swing in during lunch before we had to head to the airport. I was SO EXCITED.

But it felt all wrong. I don’t belong there anymore.

To even get into the building, I had to ring the buzzer and hold my now-California driver’s license up to a floating camera in the sky. The sign said, “Please state your business,” so I said, too loudly and to no one, “I’m…um…here to visit…everyone?” Our secretary laughed and let me in.

My department was already gathered for lunch in the lounge, so I raced to get there in time. I had no key. I had to knock. Ouch. Even so, those 27 minutes were wonderful — they went much too quickly, but for just a second, I felt like myself again. When the bell rang, I walked upstairs to my old room; my friend had to unlock the door so I could see it. An old student passed me in the hall and stopped to talk. And then, as she waved and headed downstairs, I found myself alone. It was The Day of Empty Hallways. There were a million other people I wanted to see, but my friends all had things to do. They were in their classrooms — comfortable places that still belonged to them — with students who knew them and who used to know me. I was officially just a visitor.

It was good to go back to the school, but I doubt I’ll be doing that again. It was strange, and more than a little sad, to feel lonely in a place so familiar. That said, the next time I come home, I hope all my teacher friends will be up for a bar night instead! At least we can make that last for longer than 27 minutes.

The cold. I’m not sure how this happened, but I haven’t even lived a whole winter in California and I’ve already grown a little soft. For Michigan, the temps weren’t even that chilly — I think they bottomed out at thirty-two degrees while we were there (though I hear they’ve dropped considerably since then). Because of an utter lack of suitcase space, I’d only packed a thinnish jacket for me, and the air felt frigid.

And then one morning, we left brunch with my parents and headed out to the parking lot. To my horror, Peaches — usually a tough little cookie — clutched her puffy coat around her and wailed into the wind, “I am FREEZIN’!” Oh, no, girlfriend. Thirty-two degrees is nothing, and just last year you would have agreed. You went sledding in snow pants and played outside until your cheeks were chapped. NO. I cannot let this state turn my family into a bunch of winter wusses.

I think it’s time for a little more snow exposure…somehow. For now, though, I’ll…uh…just go ahead and settle back into these sixty-degree January days.

3 comments on “Places I Do Not Belong”