Right this very second, I am several miles in the air. MILES. We’re flying back to Michigan after our house-hunting trip. And as I always do on any flight, I am panicking just a little bit.

Generally, if you’re not a superfan of flying, your biggest fear is probably that the plane will crash. Me? I’m worried that my ears are going to explode or that someone near me might throw up.

I know these are two strange things to be concerned about. But there it is, coming to you live from a neurotic emetophobe on a plane.

At the moment, because there are two hours left to go and we are steady in the air and I can see the ground below me, barely moving, my panic level is at, like, a two. It’s there, and I have to remind myself to take full breaths every now and then, but I’m good. We’re just gliding here.

Of course, I’m still hyperaware of any tiny sign of illness around me — can that guy PLEASE stop coughing? And OMG, SOMEONE JUST SNEEZED — because I am trapped in the sky with fake air flow coming from a twist nozzle above me, and because I am forced to breathe this in. Still, all I’ve got right now is a slightly elevated heart rate.

The panic will intensify the second I feel that first plunge into descent.

My first worry: exploding ears. I have freakishly tiny ear canals — a doctor once called them “almost invisible” — which sometimes do not perform as normal ear canals should. Exhibit A: When I was a sophomore in high school, my family took a pretty incredible trip, and many trips that are incredible do require a flight. Things were going swimmingly until we first started to descend. Chewing gum did nothing. The pinch-and-blow method did nothing.

“You need to yawn!” my dad kept saying, although I could barely hear him past the pressure and the pain. “Just yawn!” But at that point, I was too worked up for my body or my brain to allow such a thing.

By the time we finally landed forty-five minutes later, the pain was so intense that I was in tears (which, by the way, I do not recommend — crying caused even more congestion and made the situation worse). My ears didn’t return to normal for weeks. 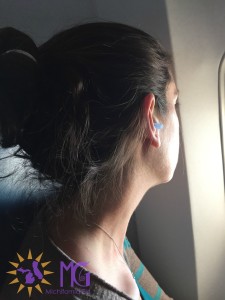 In an effort to not let fear get the best of me, I’ve flown a couple dozen times since then. I wear these bizarre blue ear plug things called EarPlanes — and even though it’s probably just a placebo (and even though they totally make me look like an alien), I haven’t had a problem since. *Knocks wood.* But the second we start the landing process, I still go into lunatic mode: pinching and blowing, compulsively attempting to yawn, and just generally acting like a crazy person. For Al’s sake, though, I try REALLY REALLY HARD not to cause a scene about it. Panic level: five.

Almost worse than that is when the descent brings turbulence of any kind. Turbulence means that someone might get air sick, which is a horrific concept for an emetophobe. Of course, it’s not as bad as it could be, since that person is likely not contagious — but, um, I still don’t want to be around it. If someone busts open that miniscule white barf bag, the panic level rockets to an eight. (I’m talking to you, twelve year-old girl in the neon yellow sweatpants across the aisle. Are you looking at your dad and making fake gagging noises just to be funny? Well, you’re scaring me more than a little.)

And then, like a normal person, I want us to be safe. I want all the landing gear to work properly and for the cabin doors to open with a triumphant swoosh and for everyone to exit the plane toward home.

Flight attendants, you fascinate me. The way you do this all the time and walk around like it’s the most pleasant experience in the world — thank you for allowing me to remind myself that it must not be that bad. Thank you, pilots, for returning me safely to my daughter.

And thank you, everyone else, for pretending you don’t notice my alien ears and my shallow breathing and the way I try to hide all that not-so-covert yawning. This irrationally anxious flier appreciates it.