Al and I are in California this weekend to try to find a house. Peaches stayed in Michigan with my parents (see this support system I’m leaving behind? Argh). Three days and fourteen houses later, I thought I would check in with a dose of positivity.

Lest you think I’m JUST capable of worrying, I now bring you seven things I happen to be pretty excited about. It’s only seven, okay, not thirteen — but it’s something.

1. Sushi and Jamba Juice.
As you might imagine, the California rolls in California are LEGIT. The ones we’ve had so far are crab, not krab, and there’s a meatiness to the sticky rice that I haven’t found in Michigan. Once I can have raw fish again, I’m pretty sure the salmon sashimi and spicy tuna will not disappoint, either. And Jamba Juice — are you kidding? Why hasn’t this place made it to the Midwest yet?

2. Weather.
I know I mentioned how much I will miss having four distinct seasons, and I definitely will. But it’s sort of nice to wear flip flops in March, and to not have to keep a bulky winter coat in the car justincase. My kids and I will actually be able to do stuff outside for most of the year. I rather like the thought of that.

I love me some Michigan, but our roads are notoriously bad. Like, bumping-along-all-the-way-to-work and praying-you-don’t-hit-a-canyon-sized-pothole bad. If you’ve lived in Michigan for any length of time, you’ve heard the joke about how we do indeed have four seasons: Almost Winter, Winter, Still Winter, and Construction. In the warmer months, many roads are lined with barrels for as far as the eye can see. California roads don’t seem to have this issue (probably because they’re not getting snow-scraped three times a week). The smooth — if winding — ride is a pretty welcome change. 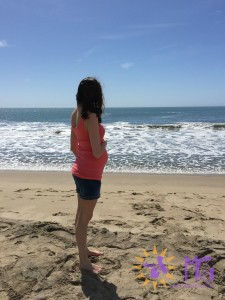 Bump on the beach

4. The Ocean.
There are very few things that impress me as much as the majesty of the sea. I love the sounds, the smells, and the feel of warm sand and salted air. Al and I visited Santa Cruz today (which is apparently a carnival, too — I can’t wait to bring Peaches the second we move!), and despite the roller coasters behind us and the shrieking children, I was overcome with a sense of peace.

It’s breathtaking to stand at the edge of the waves and look out into such a powerful expanse of water — a body so vast and so intricate that it can host baby sea urchins and dolphins (my favorite) and 200-ton whales…and a million more things we haven’t even discovered yet. When I was little, I sort of wanted to be a marine biologist for a minute. Everything about the ocean is just incredible; it’s humbling to even be in its presence, and there’s something beautiful about feeling so small. And you know what? I’m scared of a lot of things, but I would probably go swimming with sharks. Probably.

5. Freedom.
Teaching high school English has been, for the most part, a wonderful experience. But it’s also been twelve straight years of having a recognizable face in the community. People know you wherever you go. In some ways, it’s not so bad — the friendly parents and kids will wave and smile and say hello, and you kind of feel a little bit famous — but sometimes you just want to slip into Target in sweatpants and no makeup, or buy a bottle of wine without worrying about which student will be bagging your groceries. Soon, I’ll actually be able to wear a dress that hits above my knees, or throw on a tank top and not have to think about putting something over it. It’s a weird — and freeing — sensation.

And the grading! No more quizzes? No more journals? No more essays? What percentage of the last twelve years have I spent with a red (or green, or purple) pen in hand? It’s mind-boggling to imagine how much brain power has gone into fixing comma splices and MLA format and there vs. their — and half the time, all that graded work ends up on the floor when I pass it back, anyway. I always joked with the kids that if I were rich, I would still do the teaching part, but I would DEFINITELY hire someone else to do the grading. What a strange relief to leave those stacks (upon stacks upon stacks) of essays behind.

What will I be able to do when I am no longer teaching? Spend more time with my own children? Read more books? Find and follow my passion? I’ve defined myself by WHAT I DO for so long. It’s exhilarating — and scary — that I might have the chance to learn a new side of who I am.

6. Adventure/A Fresh Start.
There are exactly zero adventurous bones in my body. None. A few weeks ago, Al told me, “Even if you were living in Hell, you would refuse to leave because you’re used to it.” He’s right. I don’t push myself out of my comfort zone all that often (although this blog is a good start — putting my words out there is pretty terrifying for me).

Plus, as I imagine is the case for many of us, I can’t truthfully say that I have no regrets. I really want to subscribe to the Live-and-Learn mantra — but there are a handful of different choices I’d make if I could, and some dissolved friendships that surround me, and a fresh start might be exactly what I need. I’m not the same woman I was at twenty-two. It could feel refreshing to be known only as Thirty-Something-Me, without the judgment that accompanies the person everyone thought they knew before.

7. Potential.
Financially, these first few years will probably be difficult for us. We’re losing my income, we’re adding a child, and we’re moving to a place where housing costs are astronomical. Hopefully, though, the five- and ten-year plan at The Company means more growth for Al and our family than we would have in Michigan. I’m not the best when it comes to looking at long-term plans — forty years old seems a lifetime away to me — but at some point, we might actually be able to afford a third child. There is potential for that. And I would have ten if I could (a strange sentiment from someone who was ambivalent about children before I had Peaches).

So yes, this house-hunting trip has been eye-opening in several ways. We haven’t secured a rental just yet — like I said, prices out here are outrageous! What would be a relatively standard $200,000 home in Michigan is like $1.2 million here. Whaaat? Are people just in debt up to their eye sockets?

We found a house we love, but for now the owners are playing hardball with our offer (which already stretches our budget super thin). Everyone says the market moves so quickly in California that people often snap things up at asking price, so I’m a little concerned. But this is a post about the bright side, so I’ll end with my fingers crossed.