UPDATE: If you arrived here via Google, you’re probably looking for this article instead. Just a hunch.

School is going on right now. MY classes are in session, right this very instant, and I am not there.

I am not a teacher anymore.

Maybe if I say it another eighty-seven times, it will finally sink in. Because right now, I definitely still feel like I have stacks of essays on a desk somewhere, and last night while I was grocery shopping I kept thinking about what I’d need to pack my lunch. But I’m not a teacher anymore. My last day was Friday.

The weird thing is, I leave teaching once a year, every June. We spend days tying up loose ends, we post grades and clean our rooms, and we go home for two months of summer and come back to a brand new batch of kids. Summer feels free and delicious, at least for the first few weeks (or until we start our summer jobs, or attend conferences and classes, or start planning for the following school year). You feel a little lighter when you close your classroom door and leave in June. I expected it might feel something like that — maybe times a thousand. But it doesn’t.

Instead, it feels uncomfortable. Someone else is in my classroom. Someone else is with my kids — the ones I’ve spent eight months teaching. Those kids know my rules and expectations, and they know me. I should be in there with them. 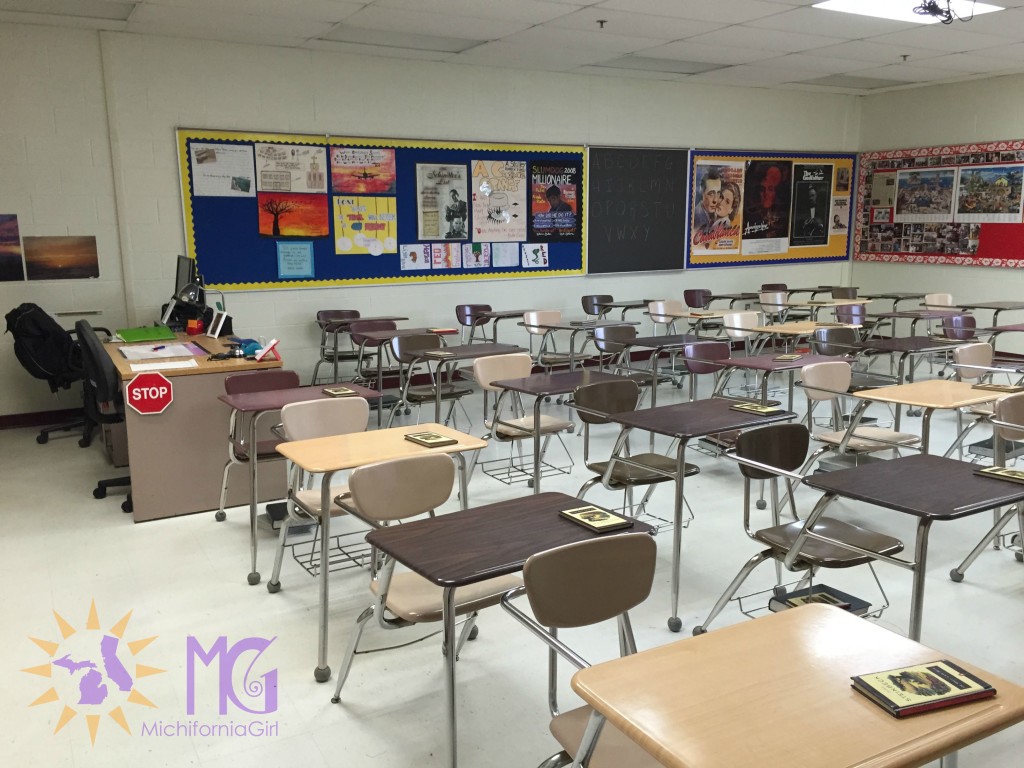 There are twelve whole years of memories stuffed in here.

I’m not the one who is supposed to leave. My kids graduate each June, and I say goodbye to them as they move on to other things and other places, but I know I will be the one to return again and again. There is a stability about summer. It’s like, I don’t really believe what’s happening right now, but summer is a fact. 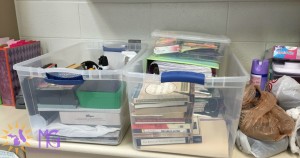 Yes, that’s a can of Lysol and two bottles of bleach spray. I told you I’m a germophobe.

The second we agreed to move to California, I knew this day was coming — but first of all, it came MUCH too quickly, and secondly, I still can’t wrap my brain around it, for some reason. What do I have to do to make it HIT me? Will it just take a while?

It started to feel a little more real last Wednesday when I stayed late to pack up my classroom. I left a lot of things behind for the next teacher, even though I bought most of it with my own money — all kinds of office supplies, books, posters, and even my desk lamp and personal printer — because it would be pointless to lug all that to California, and the next teacher will need them right away. In the end, I took two plastic tubs of belongings.

The staff and students sent me off with some things, too. One of my closest friends arrived Friday morning with Best Wishes balloons and my favorite cookies from the local bakery. My kids came in all day long with chocolates, flowers, letters, cards, a handmade keychain based on an inside joke from the beginning of the year, and even some adorable Red Wings onesies for the new baby (I will always be a die-hard Wings fan no matter where we are). Some senior girls from last semester made me tear up with a bracelet inscribed, “It’s about the journey, not the destination.” The English department threw a mini-party after school, and a lot of staff members came and ate cake and signed a banner and hugged me goodbye. Everything about my last day was totally unexpected and overwhelming — apparently, if you ever want to feel appreciated, leave.

Of course, that also means it’s over.

Last night, to make myself feel better about things and to try to FORCE it to sink in, I made a list of all the things I wouldn’t have to do now that I’m not a teacher anymore. I’ve already mentioned how I feel about grading, and it’s not just about the essays — I won’t have to grade the little things, either. Journals, vocab quizzes, unit tests, grammar practice, tiny five-point homework things that I’d get ninety-seven of at a time. I won’t have to pack my lunch every night, or set my alarm for 5:30 AM, or worry about cramming a zillion things into one fifty-six minute administrative observation. I won’t have ask the kids to put their phones away every thirty seconds.

My vocal chords will finally get the break they deserve. They’ve been heavily abused for more than a decade now. When you’re a teacher, as you might imagine, you spend the majority of your day talking. Even though English isn’t a “lecture-y” kind of subject, it’s definitely full of discussion — and to keep that discussion lively, you have to muster superhuman amounts of energy and project all the way to the back corner because the sound is getting absorbed by thirty-five students and dammit, you will NOT let them fall asleep while you’re up there dancing like a monkey. Just this past fall, I spent three consecutive months with a raspy, 75%-healed voice. I could push it enough to talk, but singing lullabies to my daughter? Forget it. It was kind of devastating. The doctors always tell us to go on vocal rest when we get laryngitis, but that’s an impossibility as a teacher. Now those weary chords might actually get a chance to fully recover.

And admittedly, it was a relief to throw away the binders that contained all those district goals — goals we prove we’ve met by writing a several-page essay and attending a one-on-one meeting about our “artifacts.” And I honestly don’t know how many more times I could have gotten through The Crucible or Of Mice and Men — works of literature I love dearly, but that I’ve read no less than thirty-one times throughout my career so far. (I counted.)

The list of things I’ll miss is shorter, but the weight of those things is far heavier. Like, even though I’ve memorized the books themselves, those “Aha! Moments” always felt fresh. As an English teacher, I got to see them a lot, and they were about important things like life and perspective and truth.

And there’s nothing like the sound of thirty-five simultaneous peals of laughter — teaching sometimes feels a little like doing stand-up, and when the whole class laughed at a joke or story I told, it was exhilarating. They’re actually listening to me. Coolest. Thing. Ever.

Plus, where am I going to learn all the teenage lingo now? (“We need to take a squad pic before you leave!” my sophomores said. A squad pic. And “on the daily” for every day. And they “search up” things on Google. Didn’t it used to just be search? Nope. Turns out we were wrong.)

I will miss those kids. And my colleagues, who are some of my best friends.

At some point, I imagine that I’ll actually be able to wrap my brain around this. But for now, I feel like I’ve lost a lot of my identity. “I teach high school,” I used to say, and it seemed like a part of my definition. Now I look in the mirror and feel a little like I don’t know myself. If I’m not a teacher anymore, who am I? Hopefully someday soon I’ll have an Aha Moment of my own.

7 comments on “I Guess I’m Not a Teacher Anymore”