If you’re traveling to Ireland from America, you probably expect to alter your driving strategy to match the whole left-side-of-the-road thing. But I kind of figured that if you stayed within the U.S., driving would more or less stay the same.

Not so, as it turns out. At least not for me. Driving in California has been more of an adjustment than I anticipated. I’ve mentioned the U-turns and the cyclists — which were obvious from minute one — but there have been a whole host of new surprises now that we’ve been out here for a few weeks. Here are eight things this Michigander is still getting used to:

1. Merge Metering.
I’m accustomed to using on-ramps as GET-UP-TO-SPEED!-GO!-GO! ramps. And you know, sometimes California does expect you to proceed that way. But sometimes it doesn’t. So on occasion, I find myself barreling toward the freeway and suddenly needing to slam on my brakes because of the red light that is happening just up ahead. On the entrance ramp. I understand the concept of bottlenecking, and I get that ramp metering is actually supposed to help. It’s just so…unnatural.

2. Unpredictable traffic jams.
On certain roads, it’s totally smooth sailing smack in the middle of rush hour. And then sometimes it’s 2 PM (or 10:30 PM…what?) and you find yourself in a gridlock. How can one plan to be anywhere on time? From what I understand, this phenomenon becomes even more of an issue the farther south you go, reaching its unpredictability peak somewhere around L.A. 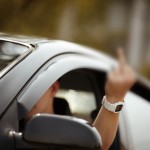 I’m pretty sure I haven’t been in California long enough to officially qualify this as A Thing, but in my short time here I have oft been confused by people’s flip-the-bird choices. Once, as I was turning onto my street, I passed a guy in his early twenties who was busy flipping off a man at a nearby gas station. From what I could tell, the recipient was just innocently filling up his car, but then he flipped him off right back. The original flipper didn’t even flinch. There was no emotion on his face whatsoever. Instead, he just leaned his elbow casually out the window and drove on.

Another time, I was sitting in one of those unpredictable traffic jams waiting for a green light. For miles, everyone had been driving normally — albeit SLOWLY — and I hadn’t witnessed any egregious behavior. Then I caught sight of an SUV that was stopped several car lengths up. Simultaneously, three windows rolled down half-way; three masculine arms unfurled themselves into the air, middle fingers extended. They stayed that way for almost a full minute. A glance around proved that no one else looked as puzzled as I felt — in fact, most were (illegally) checking their phones in a state of blissful unawareness — and then the light turned green and everyone proceeded with their day. What does this mean? Is this like the Californian version of Aloha?

4. Carpool lanes.
Wheeeee! Such joy to zip past all that jammed up traffic! Such freedom! The law even says Peaches counts as a second person although she’s nowhere near driving age — so therefore we’re not technically “carpooling” — but hey, I’ll take it. If it’s just me and the fetus, though, no dice. Bummer.

5. Parking is a CUTTHROAT endeavor. 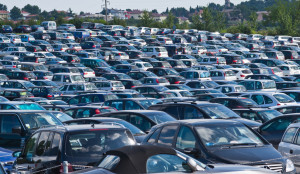 I’ve been driving for close to two decades now, and never in my life have I had a parking spot “stolen” from me. Here, it’s already happened four times in six weeks. There’s this thing called a turn signal, see? You use it when you’re waiting patiently for a spot. It’s supposed to mean something to other parking scavengers — but not in California, I guess. It’s so crowded and overpopulated here that you just take what you can find AT ANY COST. Then you pretend not to notice while the shafted driver — pregnant and in desperate need of food and/or a bathroom — flails her arms around like a crazy person because it took her twenty-seven minutes to find that spot you just stole. You just hold your head up high and shamelessly stroll inside with your bad self. Grrr.

Also, what is going on with the size of the parking spaces? They are all the precise width of a Prius. This makes it difficult to park, and virtually impossible to exit your vehicle. What happens when I need to get an infant seat out the back door? I’m not trying to ding up the BMW and the Porsche squeezed in around me.

6. Long, looong traffic lights.
This feels especially true in left-turn lanes. Sometimes the wait seems semi-normal. And then one morning you suddenly realize you’ve been sitting there since, like, yesterday, and you frantically look around in all directions, confused, because isn’t it your turn yet? Did you miss the green? It HAS to be your turn by now, right?

The answer is no. It is most definitely NOT your turn. You should probably sit back and get comfortable.

7. An overabundance of speed bumps.
Where I live, at least, they occur about every ten feet. Is this really necessary? And these things are SERIOUS. They’re not just warnings. They will rip the entire underbelly of your car right off unless you slow the hell down to approximately zero miles an hour.

8. Driving in San Francisco.
SF driving is a WHOLE different ball game. When I met a friend downtown a few weeks ago, I was totally blindsided. This is just my own ignorance, clearly, but I did not realize that I would be essentially attempting to navigate a mountainous Manhattan. These are the steepest hills in existence — like, straight up to the sun — and whenever I stopped, my car rolled backward even while I tried desperately to drive forward.

Also, I almost ran over hoards of pedestrians (sorry, everybody) because of the traffic light placement — I’m used to finding my reds, yellows, and greens suspended on a bar above me, but these lights were sneakily crouching on the corners of sidewalks, so low that my rearview mirror completely blocked them at certain angles. I couldn’t find anywhere to park (a Californian theme), ended up getting totally lost, and finally just drove around blindly because there were so many honking horns and so few places to pull over to check a map.

Such a cool place, though. On foot.

And despite all my driving blunders so far (I can’t tell you how many times I’ve had no idea what I’m doing, even with GPS), most people have been gracious and forgiving. Let’s just say I haven’t been honked at — or flipped off — nearly as often as I’ve deserved it.