People will have you believe that you need a whole lot of GEAR to sustain that eight-pound being you just brought home from the hospital. And it was secretly a lot of fun to fill a multi-page baby registry with novelties and trinkets and doodads. When we owned our home in Michigan, we stocked the nursery with everything we thought she’d need until she was, like, five years old. But since we’re now renting a temporary house in California, there’s no pressure to paint and get all fancy for Baby Number Two. We don’t even know if we’ll still be here for his first birthday, so it seems pretty pointless to think beyond the first few months of babydom.

Unfortunately, “people” are semi-right. You kinda do need a lot of gear — just not nearly as much as we thought the first time around. So what do we ACTUALLY need to pull out of storage? What REALLY needs to be washed, cleaned, and prepared before we leave for the hospital? Again, not an expert — but feel free to listen in (and contribute) while I think through this list and try to get organized because OMG WE’RE RUNNING OUT OF TIME.

I was able to narrow down my pregnancy comfort items to three, but had to expand my newborn must-haves to ten. The first five are obvious, but I think it’s a safe bet that most parents will need these:

Some of these items have options so extensive that it would require a whole blog post for each one. Plus, your parenting philosophy will guide a lot of those details (e.g., cloth or disposables for #3?), and the research on all that is already exhaustive. This same philosophy will also dictate some other things you may need: a breast pump? A nursing cover? Bottles and formula? Pacifiers? But the items above can’t NOT be included in a list of newborn must-haves, so there they are. I will say this: it’s been really convenient to have a travel system, wherein the car seat pops right into the stroller. I will also say that these prefolds make for some hella absorbent burp cloths.

It’s also tough to avoid going a little crazy when it comes to adorable baby clothes; but honestly, zippered, footed jammies are where it’s at for us. Pulling up pants on a human with no leg strength is sometimes a challenge (as is wrestling a dozen pajama snaps into place, in the dark, after a 3 AM feeding).

The last five are some helpful items that made life a whole lot easier with P, so we are definitely busting them out again.

6. Bassinet: We choose not to co-sleep for a plethora of reasons, but we also aren’t quite ready to plunk baby in his own room on day one. It took about eight months before we fully transitioned P to her crib. She slept in our room, near our bed, in a device that sat at an incline (she had some serious spit-up issues). The problem was, she got so used to sleeping in an upward, cocooned position that it took some effort to eventually make her lay flat in her crib. 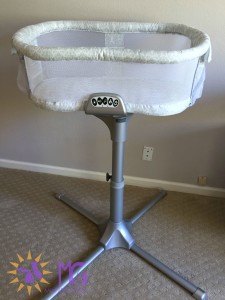 This time, we’d like to emulate crib-sleeping as early as possible, but still keep him close to us at first. We picked up this puppy: the HALO Bassinest Swivel Sleeper. (I also bought a couple sheets, since I’m sure Baby Brother will not be spit-up free, either.) I guess I can’t officially call it a “favorite” yet, but I have high hopes; if anyone’s curious, I can give details after a few weeks of use. Al reports that it was pretty easy to put together, and I like that it’s height adjustable and offers an almost-but-not-quite co-sleeping capability. The point is, if you’re not bed-sharing and you’re not using a straight-up crib right away, you need something along these lines. The idea of a full-fledged nursery right off the bat seems a little silly to us now — I mean, we’ll see how it goes, but we probably won’t even look into cribs until Christmas-ish.

7. Swing: We tried a couple of these. The Mamaroo was okay for the first few weeks, when baby will sleep pretty much anytime, anyplace — but once the world got interesting, this just didn’t have enough motion to do much. We kept it, and we’ll probably use it here and there, but with more realistic expectations: it’s basically just a safe place to put the baby when your arms need a break. For napping purposes, though, we’re returning to the Fisher Price Cradle ‘n Swing. For several months, Peaches took her longest naps in this. We needed to adjust the feet sometimes to make sure it swung evenly, and there is a semi-annoying clicking sound at certain speeds, but the most frustrating thing for me is that it takes up such a large footprint. In general, I don’t like to consume every square inch of my home with baby gear, but for this thing, I’ll make an exception.

Some people will say it’s not a great idea for a baby to get accustomed to sleeping in a swing at all, and more power to them. But you know what? When I needed two hours to clean or rest or be an exhausted new-mom zombie, this was a Godsend. From time to time, I worried Peaches would get so used to sleeping there that she’d never sleep anywhere else — but I think it was our pediatrician who finally said, “I promise you, she will not be a kindergartner who sleeps in a swing. You do what you need to do.” Turns out she wasn’t even a one year-old who slept in a swing. It was just a glorious invention that worked beautifully for us for a few months, and that was okay.

8. Bouncer: By far, the best choice for us was the BabyBjörn Babysitter Balance. While many bouncers seem to lay almost flat, the three positions on the Babysitter Balance offer some true variety. I especially appreciated the almost-upright position (that was our go-to from about two months on) — it kept Peaches engaged because she was able to look all around and be a part of things. It was especially successful once we added the wooden toy bar (which has become stupid expensive, for some reason — it’s almost doubled in price since we bought it). P spun those flowers and googly eyes forever. Also worth noting: it was super easy to unhook the cover and slide it off the frame. Helpful, since I tend to over-wash all my baby gear and it was in the machine often.

9. Swaddle: I can’t tell you how many of these we tried. Peaches wasn’t a great sleeper in the beginning, and we were kind of losing our minds, so we attempted anything and everything we could get our hands on (including a MASSIVE, puffy sleepsuit that made her look like a baby astronaut). We had an unbelievably terrifying experience with one of the swaddles we tried — probably not the fault of the swaddle itself, but the way we were taught to wrap her. Even so, I won’t ever be able to use that kind again, and after months of trial and error, we finally settled on a favorite: the Halo SleepSack Swaddle. The zipper’s design makes for easy diaper access, and the wings allow you to swaddle arms in or out. We’ll be stocking up on these.

I saved the most important for last.

This tiny device prevented the aforementioned “terrifying experience” from becoming a life-altering, devastating, unthinkable experience, which I forced myself to explain in more detail here. Suffice it to say that I will never be without this. Ever.

As always, I make no guarantees that any of this will work for your family; but, as they say, these are a few of my favorite things. What are yours? If I missed anything that we absolutely have to have, let us know what to pick up!