Yesterday morning, after another round of steam mopping and sanitizing, I thought I’d treat myself to a breakfast sandwich and cherry pastry at a well-known bakery-café. “And a medium coffee, please,” I said. The employee cheerfully handed me an empty to-go cup.

As I turned toward the coffee carafes, the patron behind me gaped at my belly. “Are you sure?” she asked with raised eyebrows. It was a woman about my age, holding a toddler by the hand.

“Oh, it’s just for a half-caff,” I reassured her, as if I owed this stranger some explanation. I slunk away and pulled the decaf lever, guilt slowly melting into irritation. My eyes were narrowed by the time I topped off my cup with regular light roast, just as I always do.

I was annoyed with her, yes, but I was also annoyed with myself, and with a society that treats pregnant women as if they are everybody’s business. If you have ever been with child, you could probably tell us countless tales about all the strangers who reached out to rub your stomach or offered (sometimes inappropriate) unsolicited advice. I once had a parent sit down at conferences and say, “Hi, my child loves your class. Are you planning to breastfeed?” Why, hello. Nice to meet you.

With Peaches, I read everything I could find about The Pregnancy Rules, and I did my best to follow everything to the letter — but all the contradictory research gradually rendered that impossible. This time around, I figured I should just stick to what my doctor recommends. I don’t smoke (never have), I don’t drink (um, REALLY miss it), and I don’t eat raw fish (really miss that, too). For the record, my OB has also mentioned that I prooobably shouldn’t be in a crouched position scrubbing floors, and that I’m supposed to be avoiding stress.

Whoops. I’m really trying to get better about that, Doc.

But there are some behaviors she thinks are just fine, even though I’m not sure that the general public — at least according to the Interweb and random women in a bakery — would approve. These are my pregnancy confessions.

So, about that coffee.
The OB says I can have a cup a day at this stage in the pregnancy. I’m trying to do one better: I allow myself a half-caff, and generally drink about half of that. The entire time I was pregnant with P, coffee was about the only thing that turned my stomach; I couldn’t even handle the smell, let alone the taste. That was the case for the first twenty weeks of this pregnancy, too, but it’s dissipated in the past couple months. Enter my trusty half-caff. (When I was teaching and non-pregnant, I could drink two to three nice, strong cups a day! Yowza.)

Hilariously (or not), when I did an image search for this post — “pregnant with coffee” — most of the photos I found featured pregnant women holding a coffee mug in one hand and a cigarette in the other (as if to suggest these things are equivalent?). This isn’t so much the case on Google images, but the stock photo service I use was overrun with these types of pics.

While we’re discussing beverages, I also drink bubbly.
No, not the champagne kind, unfortunately. The soda kind. I know that soda is bad for you, even when you’re not growing a human. But man, something about my pregnant self just CRAVES an ice cold Coke. Especially in the first several weeks of each pregnancy, a few sips could calm my stomach more than anything else. So yes, it’s still my dinnertime treat while I watch everyone else in the vicinity indulge in wine and martinis.

Steak = medium.
In real life, I do medium rare, so this is still a compromise for me. And though many people have reminded me that a well done steak is much less risky, I just can’t. (Burgers, on the other hand? Well done at all times, pregnant or not. Chalk it up to an emetophobe’s aversion to food poisoning.)

Soft serve is a staple. 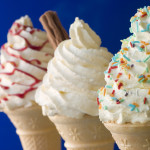 Countless websites warn against the dangers of soft serve — not because of the ice cream itself, but because of potential Listeria contamination within the tubes of the machine. With Peaches, I jumped aboard that train and skipped soft serve altogether, even though ALL I WANTED sometimes was a Banana Cream Pie Blizzard with cookie dough (which is also off-limits, according to many mamas). This time, when I asked my OB what she thought about the controversy, she stared at me blankly. “Why wouldn’t you be able to have soft serve?” she asked. I explained about the tubes and the bacteria, and she actually started to laugh. “Sometimes you guys worry about the wrong things,” she said. “In thirteen years, I’ve only seen one legitimate case of Listeria. And you know what? It usually comes from something you don’t expect.”

That’s for sure. If I’m going to stay away from soft serve, then I guess I should also avoid fresh fruits and veggies, too, since there was a big cantaloupe/Listeria scare around the time I was pregnant with P. More recently, some peaches, nectarines, and plums were recalled. And a few months into this pregnancy, I ate a tub of spinach dip that I’d purchased on a whim from a reputable establishment. A few days later, we got a voicemail from said establishment warning us that the dip was being recalled for possible Listeria contamination and we were welcome to return it. I freaked out, went to my doctor, and insisted on a blood test (because that’s the kind of neurotic I am). Once I discovered that nothing is TRULY in the safe zone, I caved and ate the soft serve.

I take hot showers.
Most pregnant women have heard the warnings about hot tubs, and the fear of overheating extends into showering, now, too. Some websites go so far as to recommend “a cool bath” instead. Sorry, folks. I look forward to that relaxing shower every single night. It’s not scalding, but it’s definitely a whole lot hotter than tepid. I also bring a tall glass of ice water right in there with me. Yum. OB-approved.

I pick up the baby.
And by “the baby,” I mean the almost-thirty-pound toddler who squirms and struggles and sometimes flings herself backward. She also does this thing where she abruptly squeezes her legs together (around my belly — yowch!) when she’s ready to get down. To be fair, my OB has asked me to limit this activity as much as possible, especially in these later weeks. But Peaches needs to be lifted into shopping carts and high chairs and buckled into her car seat, and someone needs to do those things. She also needs a cuddle from Mommy sometimes. How am I supposed to resist that? Especially when it feels so bittersweet to think that soon, she won’t be my only baby anymore. Soon, this child will look GIGANTIC beside her tiny, helpless baby brother.

At least by then I’ll be able to sip some real bubbly. But for now, Bakery Stranger, on this almost-Independence Day, please allow me the freedom to drink this barely-caffeinated coffee that I won’t even be able to finish. Happy Fourth!