Until just a couple months ago, our daughter was still in a crib.

Oh…um, is there a question in the back? Yes, you, with the impeccably pulled-together outfit.

How OLD is she, you ask?

*looks away, mumbles into back of hand* She’s thrmmhmm.

What? Louder? You can’t hear me?

She’s…she’s three and a half.

She’s almost four, okay?! She was THREE AND A HALF YEARS OLD AND STILL IN A CRIB. There you go.

I know. It’s a miracle we’re still allowed to keep her. Please don’t turn us in.

But somehow, the same child who repeatedly flings herself from multi-story play structures and cartwheels off couches never once thought to climb out of the crib. It didn’t even occur to her. And without an older sibling, she didn’t seem to realize there was a crib alternative. So we just…kept her there.

It wasn’t solely about complacency. We actively chose to prolong this milestone for as long as possible. Many frazzled friends with kids confirmed: Don’t do it. It’s awful. We’ve spent the last three nights standing outside Jimmy’s room holding his door closed while he tries to escape. We’re looking into installing a reverse lock on his doorknob. Just keep her in Baby Jail forever, okay? Promise us. YOU MUST PROMISE.

There was such a feeling of comfort, of impenetrable security, that came along with putting her to sleep in a crib; we always knew EXACTLY where she would be. Our evenings used to look like this: Shower. Brush teeth. Bedtime story. In crib by 8-o-clock(ish). Twelve hours later, we’d see her on the monitor, pulling books through the bars of her crib and reading to her stuffed animals, playing patiently until we were ready to start the day.

And then, one fateful weekend we took a trip wherein the only available bed for P was not a crib. Back at home, she informed us, politely and maturely (and so, so manipulatively) that she was ready for a big kid bed. We believed her. 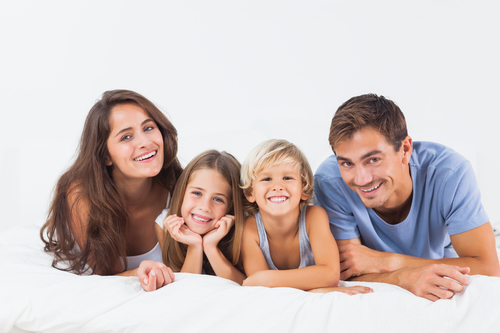 This is sooo us.* Obviously. And take a look at my thick, shiny hair. *This is not us.

Oh, it started out well enough. She was so thrilled with the new arrangement — and so terrified of losing it — that at first she behaved exactly the way she used to. But that safe, secure feeling I used to have each evening? Gone. Instantly. Suddenly I was plagued by uncontrollable nightmares of her wandering out the front door in the middle of the night, or sneaking into her brother’s room and wreaking havoc, or somersaulting down the stairs (she cracked the baby gate code long before she knew a big kid bed existed).

I was never a heavy sleeper, but I immediately lost the ability to slumber beyond a light doze.

And once it dawned on her that she was no longer trapped? Game. Over.

The baby still wakes up once or twice a night, and he’s become the easy one — we’d maybe take a newborn at this point, actually. Vanished are the (admittedly miraculous) twelve hours of P’s past. Her sleep schedule has gone completely off the, er, rails.

The minute we tuck her in, she materializes before us half a dozen times, and always for various reasons: I forgot to offer a seventeenth hug. She needs water. There was a noise. What used to be precious alone time for Al and me has become a two-hour fitness regimen in which we take turns running up and down the stairs to put her back to bed.

Finally, when the house is dark and everyone has fallen asleep for the next ninety minutes, I attempt to get some rest — but I can only lie in wait, anticipating the inevitable creak of our bedroom door, which of course will occur the very second I manage to drift off.

You have never known true terror until you are awakened by a face, two nanometers from your own face, that is breathing raspily and staring deep into your wild and startled eyes. It doesn’t matter how cherubic the cheeks — when an invisible hand shakes your shoulder and a voice hisses, “Mommmm” against your ear hairs, you are ripped from sleep with an explosion of adrenaline guaranteed to keep you up for hours. And then at some point in the night you stumble into the bathroom to pee and find her lurking in a shadowy corner like the girl from The Ring.

Despite her transformation into a nocturnal being, she now rises with the sun. At 6:30 AM, our door cracks open a final time, and we find that she has kindly roused the baby on her way down the hall.

We’ve begged. We’ve bribed. We’ve yelled. We’ve reasoned. We tried this clock, which was successful for two mornings until she figured out that it does not possess a Tase When Disobedient function and that she could actually just sort of ignore all the prettily changing colors.

In our most bleary-eyed, desperate moments, we’ve even fantasized about putting her back in a crib, because Dear Lord, WE HAVE CHANGED OUR MINDS. THIS WAS A HORRIBLE MISTAKE. Why did we not just keep her there until college? That would have been perfectly normal and healthy and socially acceptable, right?

Whatever. At this point, I’m too exhausted to worry about all that.

So now it’s my turn. Here I am, your frazzled friend, coffee in hand, and I implore you: Unless your child is hurtling himself over those crib rails in an open threat to break every bone in his body, hang in there as long as you possibly can. There are plenty of other milestones to celebrate. I know he’s getting so big and this is such a cool moment and you cannot wait to see his face the first time he climbs into that big kid bed…but he’s not ready. You’re not ready. I don’t care if he’s twelve years old. IT’S A TRAP.

Please. Please, please get some sleep for those of us who no longer do.

Okay? Promise us. YOU MUST PROMISE.

8 comments on “On Second Thought, We Are Totally NOT Ready for a Big Kid Bed”