How have I already been here for three years? HOW? Someone tell me. I demand to know. Time, you are a slippery little fish.

I’ll be honest: this third year wasn’t my favorite. I’m not sure why, but it’s getting harder and harder to be away from my family instead of easier, and my anxiety has sort of skyrocketed since last May. I think it’s mainly a combination of two things:

Loneliness
Stay-at-home momming is much lonelier than I expected three years ago. And if it takes a village to raise a child, my kids are at a major disadvantage — it’s just me, all the time. I miss going to my parents’ house every Sunday for tacos. I miss them bonding with my children. I MISS THEIR HELP. Dear God, I miss their help. Sometimes I just want them to come over for forty-five minutes so I can go grocery shopping alone or pee without someone staring at me. I want to feel like my husband can travel for work without me panicking about the possibility of something terrible happening while he’s gone because now I don’t have any backup.

Also, one of my best friends in Michigan had her first baby this year and I still haven’t met him. I would have loved to visit her at the hospital and help her through the newborn phase, but I was thousands of miles away. I’m missing too many wonderful, important things, and I worry that my children are, too.

Rejection
If last year felt like The Year of Stagnancy, this has for sure been The Year of Rejection. I stepped up my writing game considerably in terms of the stuff I’ve been trying to accomplish, and despite some extremely close calls, all I’ve heard for months is no. So for now, I’m over here thickening my skin and pretending not to die inside every time I get another discouraging email.

The Good
I didn’t come here just to complain, I promise. The mountainous view in our backyard is still a daily source of awe, and something we would obviously not be able to replicate in Michigan. I’m grateful for the moments with my kids that I never would have had if I were still a full-time teacher. I got to attend a writers’ retreat that buoyed my creative soul.

And this year, I’ve kind of fallen in love with our neighborhood — there are a couple moms my age-ish, just a few houses down, that I literally don’t know what I would do without. I’ve never had such good friends within walking distance before, and it’s a total game-changer. Want to ride bikes to wear the kids out before nap? Meet you on the sidewalk. Need to run home for a diaper? Be back in four minutes. We can sip our wine until the very last second because nobody’s driving home. They are some of the warmest, most wonderful people I’ve ever met.

Of course, the weather in California is beautiful, too. It’s the nights that win me over — the complete lack of humidity, the way you can leave the windows open no matter how hot it gets outside — even though I still REALLY, REALLY want thunderstorms and about two weeks of snow around Christmastime.

A couple months ago, as the “rainy season” (a relative term if I’ve ever heard one) was winding down, I began to take stock of our yard: I needed to decide what veggies to grow in our garden this year, which fertilizer to buy.

After going untended since the fall, my planter box had exactly one weed. I meant to pull it, but then we were out of town for a few days, so I didn’t. When we returned, it had grown a full two feet. I left it alone. It intrigued me.

In the meantime, I doted on my citrus tree. Fed it, watered it, released ladybugs into its branches to combat pests. With the exception of singing it lullabies and massaging its leaves, I did everything I possibly could.

I guess I should have done those things, too, because it died. Not just sort of hibernated for the winter. DIED. The leaves turned dry and yellow and cracked off until the entire thing was bare. I tried to resuscitate it with just about every method short of CPR. Nope. Dead.

But that crazy weed? By the end of the month, it was taller than me. 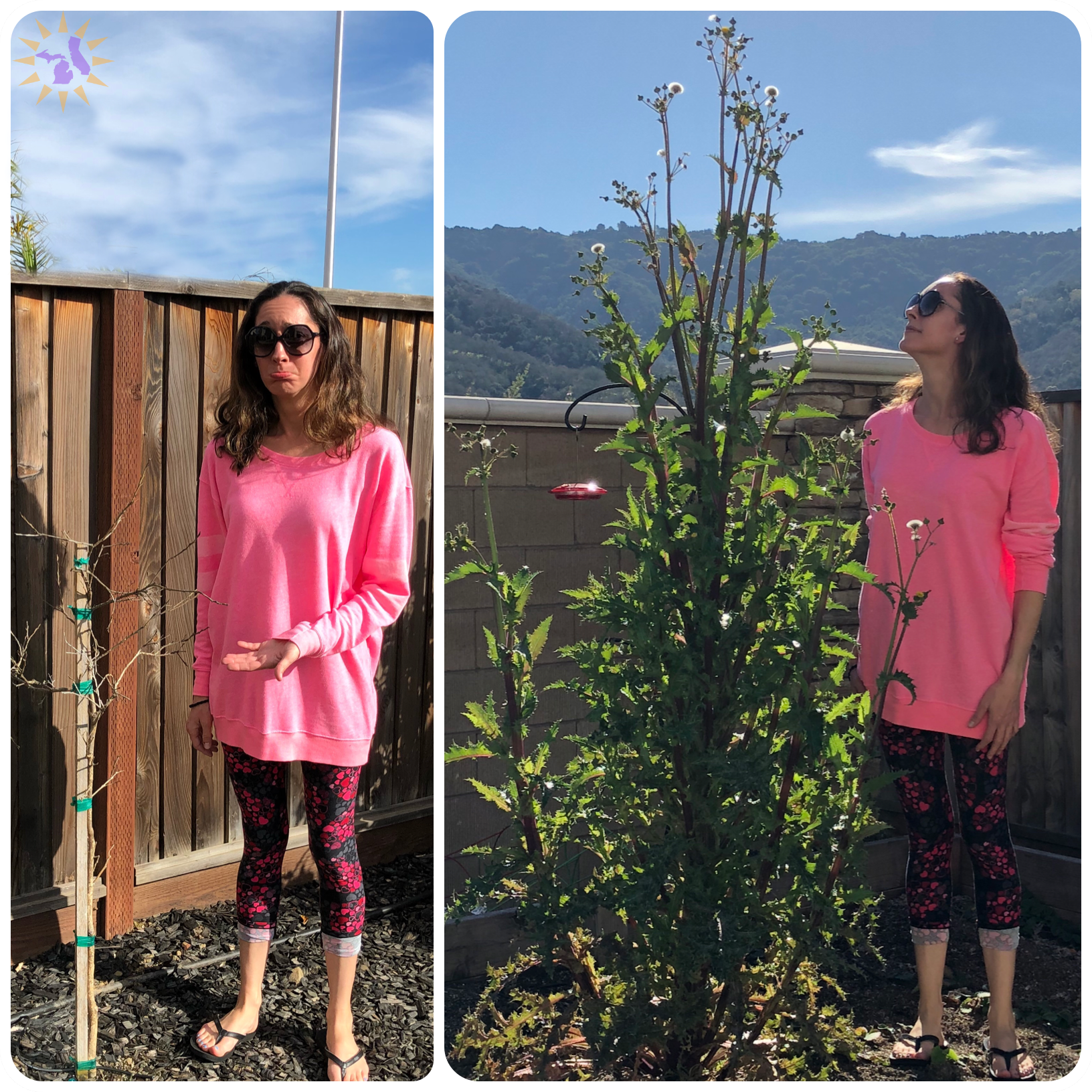 I don’t want to be the citrus tree this year, guys. It was more impressive at first, but ultimately much too fragile — just wilted and withered away although conditions were seemingly perfect.

This year it’s time to be the weed. Time to be so tough and fearless and resilient that I find a way to thrive even when I’m worried I don’t belong. Nobody planted it. Nobody babied it. Nobody wanted it initially, but it didn’t care. It grew anyway.

When we went to pull it out, the roots were so deep, its stem so sturdy, it was more like a tree trunk. We basically had to chop it down.

No more tolerating stagnancy. No more convincing myself I should quit in the face of rejection. I’m still working hard to embrace change of any kind, but hopefully my fourth year here will be full of things both beautiful and — dare I say it? — new.

4 comments on “My Third Cali-versary”