To me, a vacation is not a vacation unless every necessary item could theoretically fit inside one duffel: flip flops, bathing suits, a couple sundresses, and a paperback. Done. Then I met my husband, whose idea of a “vacation” requires all manner of puffy hugeness: snow pants, down jackets, heavy equipment, rolls and rolls of woolen socks, and boots that seem like they could walk on the moon.

Now that we’re driving distance from Tahoe, Al has been dying to take the kids on a little road trip. I was game, since Baby B has never seen snow and Peaches doesn’t really remember it — plus, she’s been asking to snowboard for many, many months now.

This is basically the whole reason Al had children. He’s been conditioning her for this very moment from the day she was born. “Look at that mountain, P! Guess what people can do on a mountain? SNOWBOARD. Don’t you want to come snowboarding with Daddy, P?” Eventually, every time we passed a mountain (which happens constantly in California, obviously), she’d say it on her own: “Imma go snowboarding on that mountain. When do I go? Can I go today, Mommy?”

So here we are, in Tahoe, and I am sitting in the hotel lobby in front of a cozy fire while the kids color nearby, and we had to buy snow pants in April, and we’ve had a full weekend of swimming in the indoor pool and exploring different eateries and riding the gondola up to Heavenly. And here’s what I’ve learned: my kids are WAY better at snowboarding than I am.

This is not a shock. I’m a beach kind of gal, after all. But I wanted to document the first of what will surely be A LIFETIME of my children doing things better than I can do them. And that’s kind of amazing to think about, and also really humbling. I made these people. I MADE THEM. And they are better than me.

No really, I’m in awe of them, for this and a million other reasons.

The drive to Tahoe took about five-ish hours, including a mid-way stop to rent P’s gear. Her snowboard was the smallest one they make. Apparently most kids her age (and younger) start with skis. Somehow, we were blessed by the nap gods and both kids slept — at the same time! — on the way up.

The views were absolutely gorgeous, but the last hour was so dizzyingly winding that I MAY need a Dramamine on the way home tomorrow. Cross your fingers.

Um, speaking of motion sickness, let’s talk about the gondola that goes to the top of Heavenly. I don’t have an issue with heights whatsoever, and on this particular ride I was still a liiiiittle alarmed. People with a legitimate fear of heights (i.e. my awesome brother-in-law, who snowboards regularly): how do you do this? What are your coping mechanisms? Because wow. 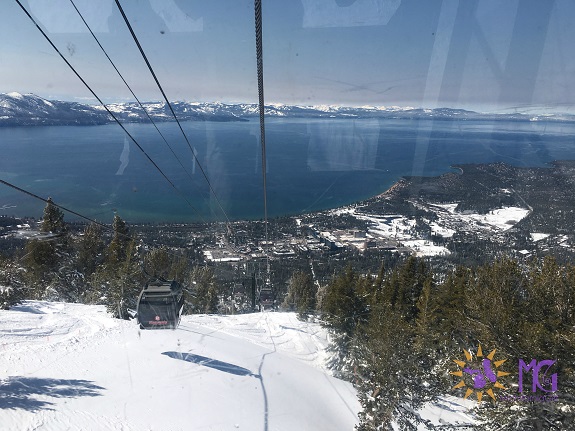 I was supposed to be on baby duty while Al gave P a private lesson, so for a little while, they disappeared up the mountain. Everything felt very unpredictable — yes, she’s been asking to snowboard forever, but this is the same child who expects to be an expert at everything THE SECOND she tries it. We did another Toddler Turkey Trot this past November (because she begged to)…and as soon as the race started and she realized she wasn’t going to “win,” she sobbed and dragged her feet and made sure she came in dead last. #proudmommymoment

Or the time we took her ice skating with everyone from Al’s team, and it was literally the first time she had EVER strapped on any sort of skate in her life, and when she stepped onto the ice and could not IMMEDIATELY perform a triple axel, she was all set with that activity. It took more than an hour to coax her back onto the ice.

So I was nervous. This could have gone really, really poorly — but for snowboarding, apparently, she is more than willing to practice. Here is her very first run:

As for B, he was VERY MUCH AGAINST the snow at first — I guess he is a true California boy, which breaks my heart a little bit. But once he saw his big sister coming down the mountain, he was all in. Since he wants to do every. single. thing she does, he insisted on stuffing his tiny little boots into her snowboard bindings while P took a break with some hot chocolate.

The baby is a tiny bit perturbed in this particular video — he keeps saying his name over and over, which is his new thing when he wants to do something ALL BY HIMSELF, and he’s not super happy that Al keeps giving him a push start.

He actually caused a little bit of a scene. People gathered behind us and stopped to stare. “I didn’t know they even made boards that small!” everyone kept saying, and “How OLD is he?” (A year and a half.) They called their friends over to watch. The baby gleefully cried, “Mo’! Mo’!” and he rode for almost an hour until I was sweating and exhausted from carrying him back up the hill.

In sum: P keeps saying she wants to move to Tahoe. I keep saying that if we HAVE to move anywhere with snow, we’ll be heading back to Michigan, thanks. B is pretty much ready for the X Games. And Al is totally in his element. 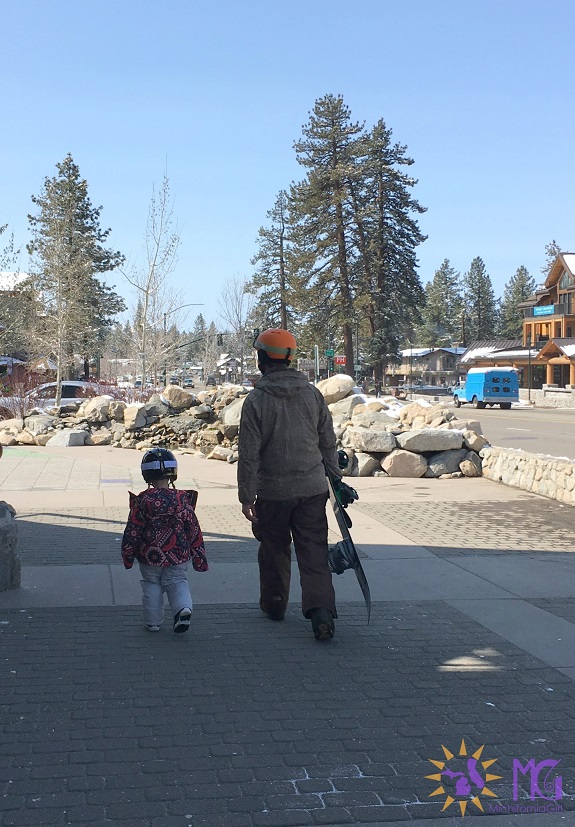 It’s been kind of a treat to bundle up again, but, um — and it hurts the Michigan Me to admit this — a few days of winter gear and I’m about ready to head back to seventy degrees. See you tomorrow, springtime!

4 comments on “My Kids Are Better Snowboarders Than I Am”