Newborns are notorious money-suckers. As I’ve mentioned before, you need GEAR. Even before that precious little bundle arrives, you will likely get swindled into spending approximately eight gazillion dollars on everything from furniture to itty bitty onesies to diapers (cloth or disposables? Discuss! …Just kidding. Worm can: opened).

Now that the holiday season is upon us, it might be a relief to know that your infant can actually save you money in all sorts of surprising ways. For the first few months post-baby, you can go ahead and budget far less in each of the following areas:

1. Pants. In general, pants are uncomfortable. Postpartum, they’re just absurd. Whether you’re caring for a C-section wound or just can’t button the damn things anymore, it’s time to shove anything with a zipper to the far reaches of your closet. Eventually it might be necessary to venture out and acquire some new ones, because birthing hips — but not right now, or for a long while. Plus, when you’re strapped to a couch feeding an infant every two hours, there’s really no need for pants. Or, you know, clothes in general. Wardrobe shopping sprees have been rendered pointless! And guess what that equates to? Savings.

2. Gas. Except for the occasional trip to the pediatrician, your vehicle will probably become something of a lawn ornament for a while. Weeks sometimes go by before you are able — or willing — to actually drive somewhere. How often did you fill up before? Once a week? Every couple days? Not anymore. A single tank of fuel will sit unused until the end of time.

Even now, four-month-old Baby B gives me pause each time I consider leaving the house. The car seat weighs a hundred pounds without him in it, and once the hum of the vehicle lulls him to sleep, I have exactly thirty-two minutes before he wakes up again, and by then I’ll have JUST arrived at my destination and will need to cross my fingers and toes that he’s in a good mood. Not to mention ALL THE STUFF I’ll have to bring with me (see above: gear).

So I reason with myself: I’ll just wait until after I’ve fed him again, just one more time, and THEN I’ll go. Mm-hmm. Right.

Get ready: your car is about to have abandonment issues.

3. Hairstyling Tools. As we have previously established, there’s a good chance you will be housebound for some time. Who needs that new two-hundred-dollar flat iron? Not you. Your shiny, freshly-straightened hair will be matted with spit-up before noon, anyway. BOOM. Money in your pocket. 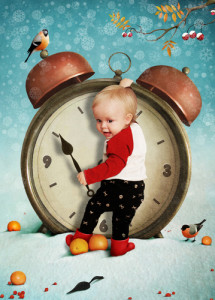 4. Alarm Clock. You know that fancy new bedside clock with the fabulous speakers that also functions as an iPhone dock? You can cross that right off your holiday wish list. There is absolutely no need for an alarm clock ever again, because you have just given birth to one. Mine is still sort of defective, by the way — it keeps going off at 3:00 and 6:30 AM no matter what I do. I’m looking into a reprogramming function.

5. Water. The days of long, luxurious showers are sort of over. The steam, the scent of suds on a loofah, the ability to lather up before shaving — gone. When you get to shower at all, it’s mainly about efficiency, because the infant is in his crib and you are plagued by phantom crying. Lather. Rinse. Do not repeat. Attempt to wield a razor but eventually say screw it and emerge with your hair half-washed and one armpit resembling a jungle. The good news is, the water bill will plummet!

See? Your baby is already a tiny environmentalist. How sweet. California thanks you.

6. Cable. Okay, admittedly, this bill will stay the same at first — there’s not much else to do when you’re awake at three in the morning. So picture this one as more of a long-term investment: a couple years from now, your TV will magically transform into a box that exclusively streams Daniel Tiger, and you will be able to cancel all adult programming. The one instance when you erroneously assume that you have earned enough alone time to watch a two-hour movie start to finish, someone will wake up and demand a beverage twenty-three minutes in.

If that someone is your husband, tell him you’re opening some champagne to celebrate your recurring monthly savings. And then put all that extra cash toward an awesome gift “from Santa,” because girl, you deserve it.