Before we moved here, I always pictured California as a just-like-the-movies SoCal paradise: perfectly manicured palm trees, glittering sidewalks dotted with stars, 85 breezy degrees forever and ever and ever.

But Silicon Valley is a whole different beast. If you were expecting excessively Botoxed platinum blondes or shirtless yogi dudes who travel via surfboard and only know the word “brah,” then you’ve come to the wrong place.

At first, I thought Silicon Valley looked almost like the Midwest — well, plus some mountains — in that everything seems fairly “normal” upon first glance. On the surface, there doesn’t appear to be a lot of flashy extravagance. Run-down strip malls line the roads. People ride bikes. There are no throngs of paparazzi following Kim Kardashian to dinner.

But once you’ve been here for a while, you begin to notice that it does NOT in fact resemble where you came from, and that the differences go far deeper than a mountainous landscape. To a Midwestern mind, there are some things that seem pretty unusual — but in Silicon Valley, they’re not weird at all.

Oh yes, I expected to see laughably expensive vehicles in California. But I thought I might see them traversing long, winding driveways en route to epic mansions. Not in Silicon Valley, where you can rent a bunk bed in a minuscule closet for the low, low price of a bazillion dollars! Many people living in these tiny apartments are shelling out thousands a month to stay there and are legitimately wealthy, so there’s apparently some extra cash left over for that Porsche 911 Turbo parked in the driveway.

2. Hiring a gardener for a postage-stamp yard
There’s not a whole lot of space out here for things like lawns, but for some reason EVERYONE has a gardener. Of course, there are a few NorCal pockets where people actually own something that includes the word “acre,” but for the most part everything feels very much on top of each other because there is just no room. Somehow, this does not prevent all of Silicon Valley from hiring a professional to tend to their imaginary plants.

Case in point: when we were in our rental house, the landlord employed a guy who came every Tuesday — he essentially scattered dead foliage all over the yard with his leaf blower and left. At one point, we gently told the property manager that it didn’t seem like it was worth the money, and he looked horrified and sputtered, “Oh! Oh, no. We need him.”

Why? What is going on? Since we don’t get a true autumn, there aren’t a whole lot of leaves to rake. We’re not supposed to excessively water things. And there’s only space for, like, two weeds. You really need to hire someone for that? Let me put on my gardening gloves and impress you with my skills — it will take thirty seconds and your entire yard will look spotless. That’ll be fifty bucks, please.

All right, fine, two thousand, because someone has to pay for that 1-bedroom apartment.

3. Dogs in malls, grocery stores, hair salons, on restaurant patios…
I love my little Beaker immensely — she’s smart and feisty and she adores the kids — and back in the Midwest, she frequented all the usual puppy places: dog parks, sidewalks, our car.

But here, dogs are welcome EVERYWHERE people are welcome. They just go traipsing through all sorts of business establishments, including places that sell food (which I don’t think is supposed to be allowed, even in California, but who knows?).

Compare that to Michigan, where the one time I spotted a tiny non-service Yorkie at the mall, its owner was immediately almost tackled by security and asked to leave.

4. The complete inability to navigate roundabouts
Even if roundabouts were the most confusing inventions to ever hit Earth, what do we not understand about a yield sign? PSA to all the people who have no idea what they’re doing: you are not supposed to stop once you are inside the roundabout. Again, YOU ARE NOT SUPPOSED TO STOP. Everyone else is supposed to yield to you since you are already in the roundabout — which of course they don’t because they also have no idea what they’re doing, so it’s really no wonder you stopped mid-circle because you were probably about to get T-boned.

Our neighborhood exit is connected to a roundabout, and I fear for our lives every time I leave the house. Inevitably, someone will totally screw up, the wrong car will lock up its brakes, the person at fault will become furious and honk indignantly, and I will want to leap out of the car to drag everyone back to driver’s ed.

5. Fenced-in backyards
Literally everyone has this. EV. ERY. ONE. They must come standard with the homes here (probably because the houses are soooclose together that we have to delineate our own piece of the pie somehow). In Michigan, whenever a neighbor decides to put up a fence, people are like, “Uh, what’s going on, man? You getting a horse or something?” 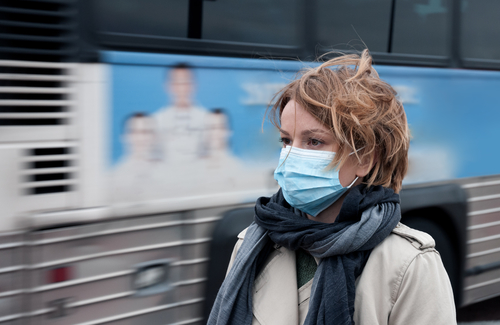 I am ON BOARD with this one, you guys. Often, when people aren’t feeling well and need to leave the house, they will put on a surgical mask. The first time I saw this, I stared. I even panicked a little, because that is my immediate response to most unfamiliar situations, and I had no idea if he’d just escaped from the super-contagious unit at the hospital or what.

But it’s just something people do out here — most of them are being courteous and trying NOT to spread their cough around, and it’s quite possibly the most considerate thing ever. Let’s implement this across the globe, yes? Okay, good talk.

7. Talking to yourself in the car
It’s illegal here to use a handheld device while driving. This has been California law for many, many years (and it took some getting used to, because in Michigan you can still drive and talk on the phone in the usual way). To work around this, everyone uses ear buds or a tiny headset or has Bluetooth technology built into their car — which means that at most red lights, you can look around at all the other drivers and watch as they appear to converse with absolutely no one.

8. Nineteen different trash cans for everything
Some establishments are way more into this than others, but throwing something out is often a mental exercise. Where does this cup go? Is this the kind of plastic you’re supposed to recycle or does it belong in the TRASH-trash? Is my napkin compostable? WAIT, GUYS! Don’t throw that pizza crust away! You’re supposed to put THAT in compost and then the PLATE goes in recycling. 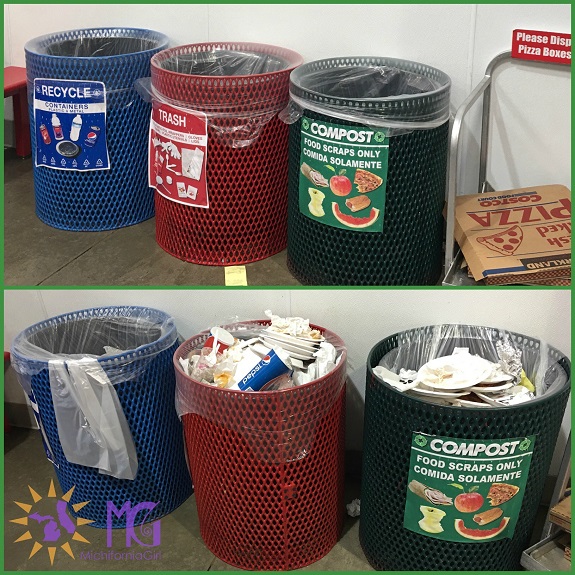 And then you approach the bins and realize no one has followed any rules and there is an equal amount of everything everywhere.

9. People leaving stores carrying armfuls of goods
I remember the first time I went to buy groceries and the cashier asked, “Do you want to buy a bag?”

Huh? Do we not just load the food into a bunch of white plastic things that we can then reuse to pack our lunches and line our trash cans at home?

There are no bags, anywhere. NO BAGS. California in general is very concerned about the environment, which is helpful, and after a while you get pretty good about bringing your own reusable bags into grocery stores. But I still forget that this rule applies to places like the mall: a couple months ago, I checked out at Victoria’s Secret, and the woman just handed me a stack of underwear after I paid and told me to have a nice day.

“Oh, um…I’d like to…buy a bag?” I said, but it was too late. YOUR TRANSACTION IS ALREADY COMPLETE. Please leave the store with your display of undergarments, and thank you for shopping with us.

10. A whole lot of signs most Midwesterners can’t read

A strip mall in Silicon Valley

There’s no place like Silicon Valley to make you question your intellectual shortcomings. Sometimes it feels like everyone is multilingual — for many jobs, it’s a requirement — and I often find myself wishing I’d not only stayed current on all those college Spanish classes, but that I’d taken a few other languages as well.

11. “Mystery Spot” bumper stickers
I’ve never been to the Mystery Spot in Santa Cruz, but half the cars in NorCal definitely have.

12. An all-consuming obsession with one school district
When someone finds out our kids are not currently slated to attend Cupertino, there’s a whole lot of wincing and backing away and making the sign of the cross, as if the mere thought of sending your children to another district is enough to turn them into complete degenerates.

To be honest, this terrifies me. We’re still too new to fully understand all the nuances of each city, but there have to be TONS of wonderful options in Silicon Valley, right? A lot of other districts seem great. I’m sure there are fabulous teachers and effective curricula everywhere. No? Am I wrong? Do we need to move immediately?

13. Flat-out ignoring people
I have met some truly wonderful people here — people I’m lucky to count as genuine friends — but I often wonder if I’ve accidentally moved to a stereotypical borough in New York City. I remember one of the first few times I tried to engage with someone when we passed: I was on my way into a coffee shop bathroom and a woman was on her way out. I smiled and said hi. She looked right through me and let the door close on my arm while I fumbled to catch it, and the whole thing felt a little like when you wave to someone because you think they’re waving to you but in reality their BFF is behind you and now you look like a damn fool.

14. The belief that 25 minutes is an exorbitant drive
If you don’t live biking distance away from something, you might as well stay home for the rest of your life. People are appalled when they discover how far away we live from The Hub of Silicon Valley: “Wait, wait, wait. You are FORTY-FIVE MINUTES from Whole Foods? Oh, no. I’m so sorry. Do you at least have an In-N-Out nearby?”

Answer: Yes. There is an In-N-Out near everything.

15. Weather-inappropriate clothing and accessories
Carrying an open umbrella on a sunny day? Not weird. Thick, furry boots and a massive puffy coat when it’s 63 degrees? NOT WEIRD. And then, the very second it’s April, everyone is in sundresses and shorts and sandals…even though it’s still 63 degrees.

Oh, and if it rains, you should pretty much just give up now.

A few things on this list probably apply to the entire state, but they somehow seem a little more bizarre in a place that doesn’t immediately feel like California in the stereotypical way that, say, Orange County does. When you look around and see the outer shell of something that vaguely resembles where you came from — and then spot a dude wearing a surgical mask while driving his Ferrari toward the studio he shares with five other roommates — you just have to take a second to remind yourself where you are. And Toto honey, we aren’t in the Midwest anymore.